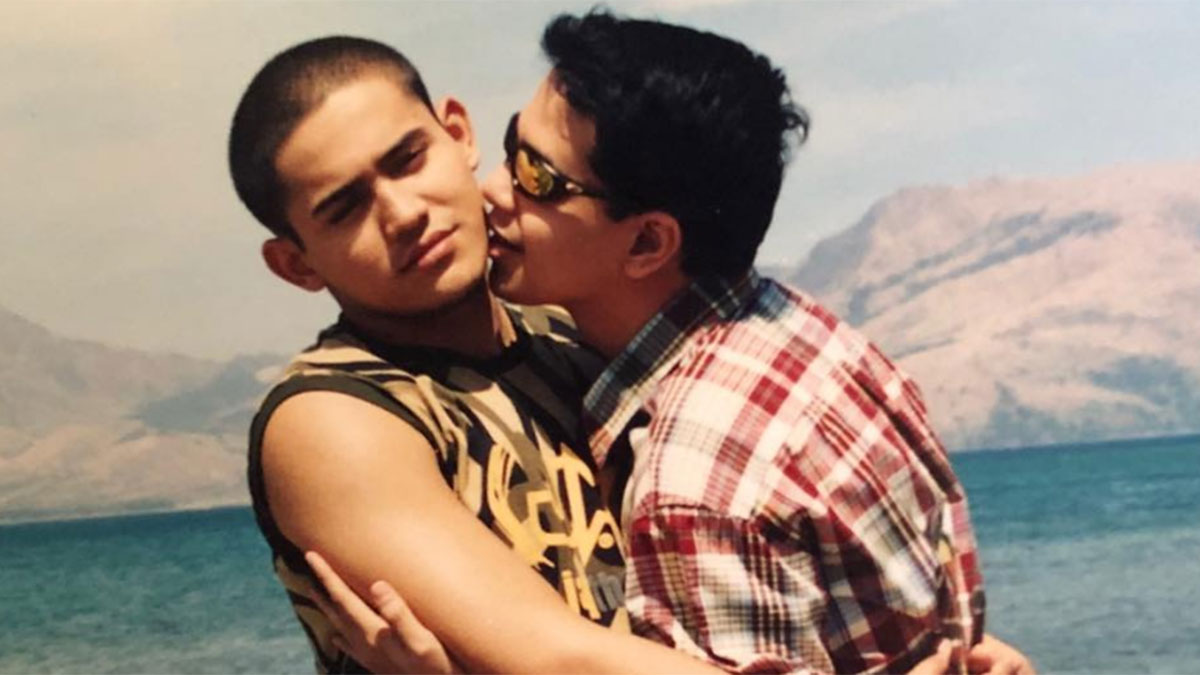 GMA-7 actor Paolo Contis took a trip down memory lane by reminscing his days when he was still part of ABS-CBN.

Paolo, a Star Circle Batch 3 member, was one of the lead stars in the iconic youth-oriented series, Tabing Ilog!

On March 16, 2019, Paolo posted an Instagram photo of him with former co-star John Lloyd Cruz.

In the photo, John Lloyd is seen kissing Paolo on the cheek.

Rovic and Badong are the characters of John Lloyd and Paolo, respectively.

Paolo, on the other hand, was paired with Desiree.

There have been speculations about iWant doing a remake of the Kapamilya show or airing a rerun of Tabing Ilog episodes.

In the middle of Tabing Ilog's run, John Lloyd Cruz almost did a network transfer to GMA-7.

However, ABS-CBN stopped him by giving him a break on television, which was the lead role in the prime-time series, Kay Tagal Kang Hinintay, in 2002.

While John Lloyd was still paired with Kaye in Tabing Ilog, ABS-CBN already capitalized on the popularity of John Lloyd's team-up with Bea Alonzo in Kay Tagal Kang Hinintay.

In October 2017, ABS-CBN announced in a statement that John Lloyd would take an indefinite leave in showbiz.

The announcement came weeks after the actor became controversial with his videos with then-rumored girlfriend, Ellen Adarna.

At present, John Lloyd and Ellen continue to enjoy their lives outside the limelight with their son, Elias Modesto.

It was in 2004, a year after Tabing Ilog ended its run,when Paolo did this career move. His first teleserye in the Kapuso network was the prime-time series, Hanggang Kailan, starring Lorna Tolentino.

He was paired with Nancy Castiglione in that series.

At present, Paolo is part of the Kapuso daytime series, Hiram na Anak.

For the other cast members, Jodi Sta. Maria and Kaye Abad are the only actresses who remained loyal Kapamilyas.

After Tabing Ilog, Jodi did kontrabida roles in the shows Kampanerang Kuba (2005) and Walang Kapalit (2007).

She would then do supporting, mother roles in her succeeding TV shows.

In 2012, nine years after Tabing Ilog ended, Jodi was given a breakthrough role in the daytime series, Be Careful With My Heart, where she was paired with Richard Yap.

The show would also enjoy a long run on television, earning several extensions until ABS-CBN decided to end its final episode in November 2014.

Jodi then assumed the iconic role of Amor Powers in the 2015 remake of Pangako Sa 'Yo, starring Kathryn Bernardo and Daniel Padilla.

She also did the daytime series, Sana Dalawa Ang Puso, in 2018.

Jodi is now set to be seen again in the prime-time arena, via the upcoming mystery drama, Sino Ang Maysala: Mea Culpa.

Meanwhile, Kaye Abad would be assigned to do character roles after Tabing Ilog.

In 2009, Kaye headlined her own afternoon series, Somewhere in my Heart, where she was paired with Guji Lorenzana.

In 2010, Kaye played a kontrabida role in the afternoon series, Alyna, as the third wheel to Shaina Magdayao and Jason Abalos.

It was in that show where she met her husband, Paul Jake Castillo.

Kaye was also part of the afternoon drama, Angelito: Batang Ama, as the third wheel to JM de Guzman and Charee Pineda.

She was later paired with John Prats in the second book of Angelito, titled Angelito: Bagong Yugto.

Kaye also played a kontrabida in the 2013 remake of Annaliza, starring Andrea Brillantes.

In 2014, Kaye got her first lead role in a prime-time series, via the Filipino adaptation of Two Wives, which also featured Erich Gonzales and Jason Abalos.

The following year, in 2015, Kaye was reunited with John Lloyd via an episode of Maalaala Mo Kaya.

It was her last TV appearance after she decided to take a hiatus in showbiz, and reside in Cebu with husband Paul Jake.

This 2019, Kaye stages a showbiz comeback as she plays a special role in the daytime series, Nang Ngumiti Ang Langit, which will premiere in March 25.

FROM KAPAMILYA TO KAPUSO TO KAPAMILYA

Aside from Paolo, Patrick Garcia and Desiree del Valle also worked with GMA-7 after Tabing Ilog.

The only difference is that Patrick and Desiree have now returned to ABS-CBN.

Patrick transferred to the Kapuso network in 2006, and was tapped to play a kontrabida role in Captain Barbell, starring Richard Gutierrez.

In 2011, Patrick decided to return to ABS-CBN via the afternoon series, Lumayo Ka Man Sa Akin, which was aired in 2012.

His last TV appearance was a special role in the daytime series, Playhouse.

Desiree, on the other hand, became a part of GMA-7 in 2006. She was able to do two shows: Now and Forever presents Dangal and Atlantika.

In 2007, Desiree returned to ABS-CBN and remained a Kapamilya until today.

Her last TV show was Asintado, and is set to be a part of the upcoming TV series, Project Kapalaran.