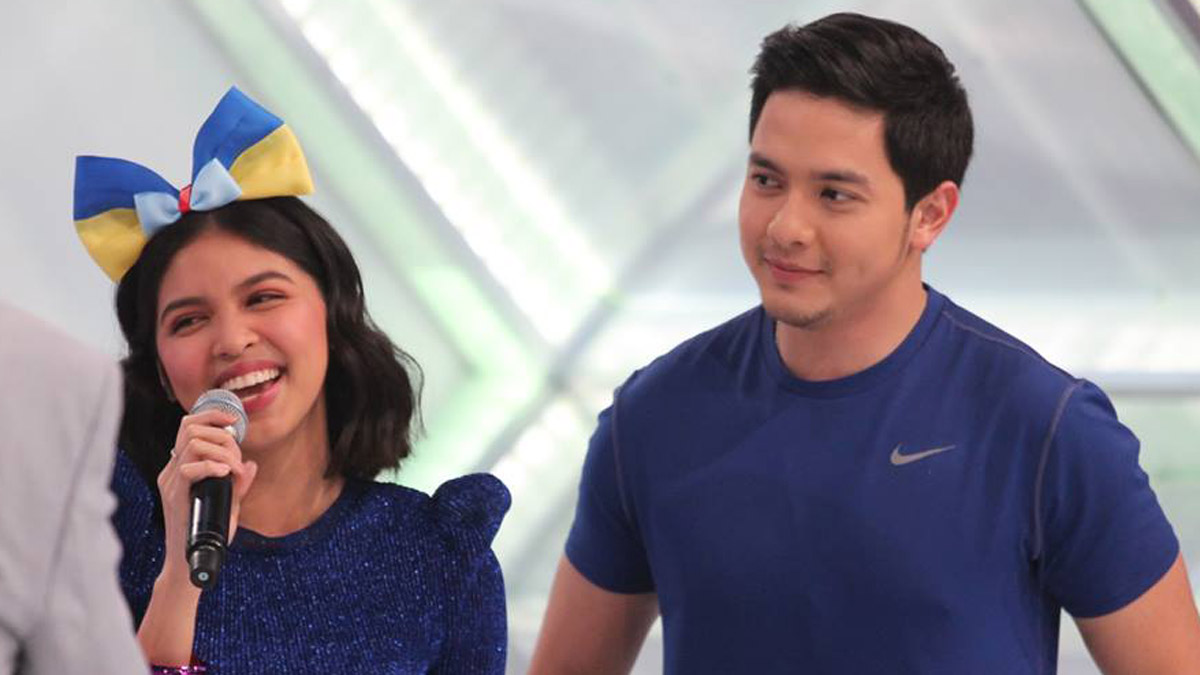 The Twitter ranking of Alden Richards and Maine Mendoza's AlDub drops to No. 3 after holding the No. 1 spot for the past two years.
PHOTO/S: @EBDabarkads on Facebook

Celebrities from rival networks GMA-7 and ABS-CBN proved their social media power as they claimed spots in the 2019 Twitter List for Top Male and Female Celebrities as well as Top Love Teams.

Twitter Philippines recently released its lists of the most talked-about Filipino stars, movies, and teleseryes from January 2019 - March 2019.

Using the hashtag #EntertainmentonTwitter, the social networking site released data about the Pinoy showbiz scene as it looked back on the first quarter of 2019.

According to Twitter Philippines, the ranking was based solely on engagement and not from “sentiment of conversation towards the individuals and/or the team.”

There was a shift in Twitterverse when AlDub's Twitter ranking dropped to No. 3 after holding the No. 1 spot for the past two years.

In 2017 and 2018, Twitter Philippines hailed the AlDub love team of Alden Richards and Maine Mendoza as the Most-Tweeted About Love Team.

This 2019, AlDub placed third among the top Pinoy love teams based on data from Twitter Philippines.

Here are the Top Love Teams on Twitter during the 1st quarter of 2019:

Taking the No. 1 spot is MayWard.

For the first three months of 2019, fans of Maymay and Edward actively discussed on Twitter about the former Pinoy Big Brother: Lucky Season 7 housemates.

The latest project of Mayward is the new Kapamilya Sunday series Hiwaga ng Kambat, which replaced Wansapanataym. Aside from Edward and Maymay, this fantasy-horror TV series also stars Grae Fernandez and Chantal Videla.

The young pair has been steadily rising in Twitter Philippines’ rankings. Mayward was the No. 5 Most-Tweeted About Love Team in 2017 and in 2018, the pair landed in the No. 2 spot.

This 2019, the MayWard love team received the Most Promising Love Team for Movies award at the 50th Box Office Entertainment Awards of the Guillermo Mendoza Memorial Scholarship Foundation.

A relatively new love team, DonKiss, was last seen in the 2019 Kapamilya noontime block series Playhouse. In 2017, Donny Pangilinan served as the escort of during the debut of Kisses Delavin. However, the pair did not make it to the list of Twitter's top love teams that year.

In 2018, the DonKiss tandem shot up to the No. 3 slot, overtaking other established love teams.

Now that the AlDub love team appears to be put on hold, the tandem of Alden Richards and Maine Mendoza slipped in its Twitter ranking.

It is the only tandem from GMA-7 that made it to this list of top Pinoy love teams on Twitter for 1Q 2019.

AlDub can still be seen on the noontime show Eat Bulaga but Alden and Maine are working on separate projects. Alden is now working on a Star Cinema movie with ABS-CBN actress Kathryn Bernardo. Meanwhile, Maine became the talk of the town for her blossoming romance with Kapamilya actor Arjo Atayde. The Kapuso actress is also part of the Kapuso sitcom Daddy's Gurl.

The reel-turned-real life couple admitted the real status of their relationship this 2019.

LizQuen’s latest project was their blockbuster Valentine movie Alone/Together, which was directed by Antoinette Jadaone.

Despite their decision to do separate projects this 2019, KathNiel makes it to the No. 5 slot of top Filipino love teams on Twitter. 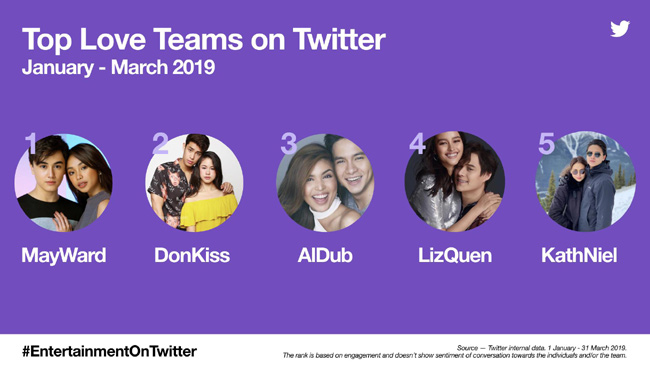 Taking the No. 1 spot on Twitter is Kapamilya star Vice Ganda. To celebrate Valentine’s Day, Vice Ganda had a concert with Regine Velasquez titled The Songbird and The Songhorse at the Araneta Coliseum.

The It’s Showtime host became the talk of the town when it was reported that his boyfriend is "Kuya Escort" Ion Perez. However, in the March 17 episode of Gandang Gabi, Vice, the comedian did not disclose the identity of his boyfriend but Vice Ganda did admit that he has been in a relationship for the past four months.

He appeared as an actor in the 2018 movie The Hows of Us and he is credited as the scriptwriter of the play-turned-movie Hintayan ng Langit.

Under PolyEast records, Juan Miguel released songs such as "Walls," "You Don’t Love Me It’s Okay," and "More Than What We Are."

Donny will co-star with Loisa Andalio and Ronnie Alonte in the movie titled James, Pat and Dave. This film is a sequel of the 2016 Metro Manila Film Festival entry Vince, Kath, and James.

This 2019, Donny was named the Most Promising Male Star for Movies at the 50th Box Office Entertainment Awards.

This April, the Hashtags member prepared a surprise birthday celebration for his girlfriend Loisa Andalio.

Produced by Star Cinema and directed by Cathy Garcia- Molina, the movie Hello, Love, Goodbye will be shown in Philippine cinemas this year.

After appearing the primetime series Ngayon at Kailanman, Joshua will star with his JoshLia love team partner Julia Barretto in the zombie movie titled Block Z.

The Kapamilya actor was named the Prince of Philippine Movies & TV at the 50th Box Office Entertainment Awards.

Popularly known for his role as Boyet in the Kapuso drama series My Special Tatay, Ken Chan makes it to the ninth spot of top male celebrities on Twitter PH.

Kyle Echarri is a 15-year-old Filipino-American singer and actor. He was part of the Top 6 of Sarah Geronimo's team when he joined The Voice Kids Season 2.

In 2018, Kyle was tapped to play Kristoff Tejada in the Kapamilya afternoon series Kadenang Ginto. 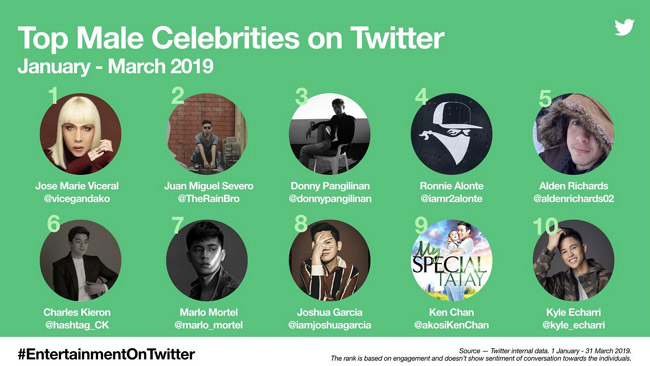 This 2019, Kathryn Bernardo will not be paired with real-life boyfriend Daniel Padilla in any project. She will have Kapuso actor Alden Richards as her partner in the upcoming movie Hello, Love, Goodbye.

The Kapamilya actress got a pleasant surprise this April when her boyfriend Daniel flew to Hong Kong to surprise her.

Loisa’s upcoming project is the movie James and Pat and Dave with Ronnie Alonte and Donny Pangilinan.

Anne Curtis makes it to the third spot of this Twitter list. Currently, the 33-year-old actress is one of the mainstays of It’s Showtime.

As part of her 21st anniversary celebration in showbiz, Anne held her #AnneKulit concert series in Canada last March.

Last March, netizens became concerned when the skin of Maymay was darkened so she could portray the role. There were those saying that an Aeta should have been tapped to depict the character.

Maymay is also part of the upcoming movie of Alden Richards and Kathryn Bernardo.

Sue Ramirez lands a spot in the list after posting sizzling bikini photos that wowed many netizens.

Maine Mendoza can be seen in the GMA-7 sitcom Daddy’s Gurl and the daily noontime show Eat Bulaga. She was reunited with Alden Richards in the March 9 episode of Daddy's Gurl.

She is also part of Joshlia’s upcoming zombie movie Block Z, which is directed by Mikhail Red.

Sofia was last seen in the Kapamilya series Wansapanataym: Mr. CUTEpido and in the episode of Ipaglaban Mo titled “Paasa.”

Kisses Delavin took a temporary break from social media to prepare for her first major concert titled A Life Full of Kisses. It was held at the Music Museum on April 25, 2019.

Currently, Alex is one of the hosts of Pinoy Big Brother Otso.

She has also been leaving a mark in digital platforms since she started being a video blogger in 2017. According to an article published by Esquire Philippines in December 2018, Alex is considered the highest earning Filipino celebrity on YouTube. To date, she has 3,421,063 subscribers in her YouTube channel.

(Read: How Much Do Mainstream Celebrities Earn on YouTube?) 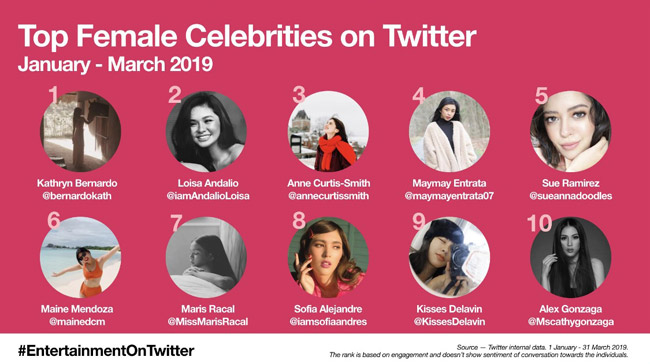 For the first quarter of 2019, three GMA-7 shows and two ABS-CBN series had the highest engagement on Twitter.

Here are the top Filipino teleseryes from January – March 2019:

In this GMA-7 sitcom, Vic Sotto is cast as the father of Maine Mendoza's character.

After five years, Angel Locsin top-billed an ABS-CBN teleserye once again through this action-drama series.

The Kapuso prime-time series Onanay revolved around Onay (played by Jo Berry) who was born with Achondroplasia, a bone growth disorder that leads to dwarfism. Superstar Nora Aunor played the mother of Onay in the teleserye. 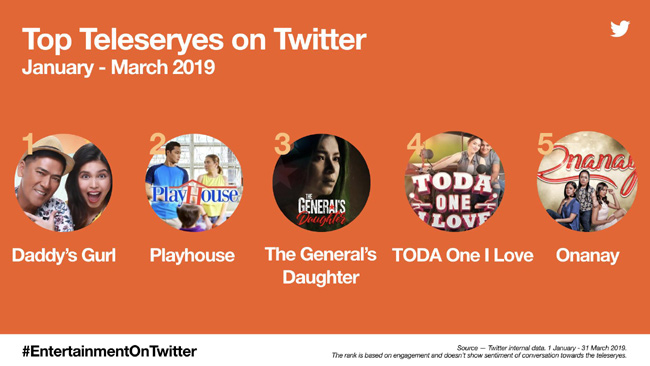 The Filipino movies with the highest engagement during 1Q 2019 were:

Liza Soberano and Enrique Gil portrayed college sweethearts who drifted apart when they became too caught up in the "real world" of work.

Nadine Lustre got separated from James Reid when she did this movie Ulan. She got three new partners—Carlo Aquino, Marco Gumabao, AJ Muhlach—as she portrayed a young girl who has nagative experiences when it comes to rain.

The McLisse tandem of McCoy de Leon and Elise Joson were reunited in this light romance movie about two college students trying to make the most of their limited time together.

In this horror film, Jodi Sta. Maria plays a stepmother who gets haunted by her possessed stepdaughter. 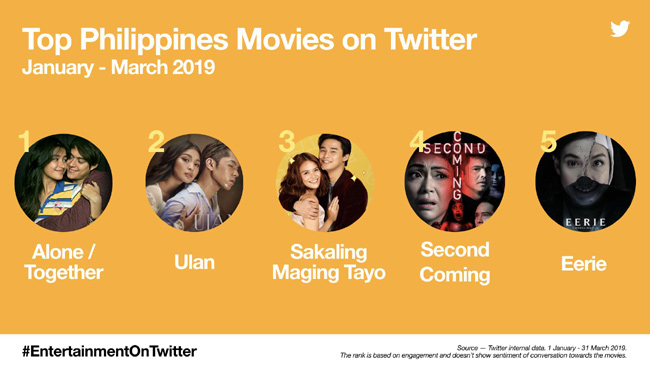