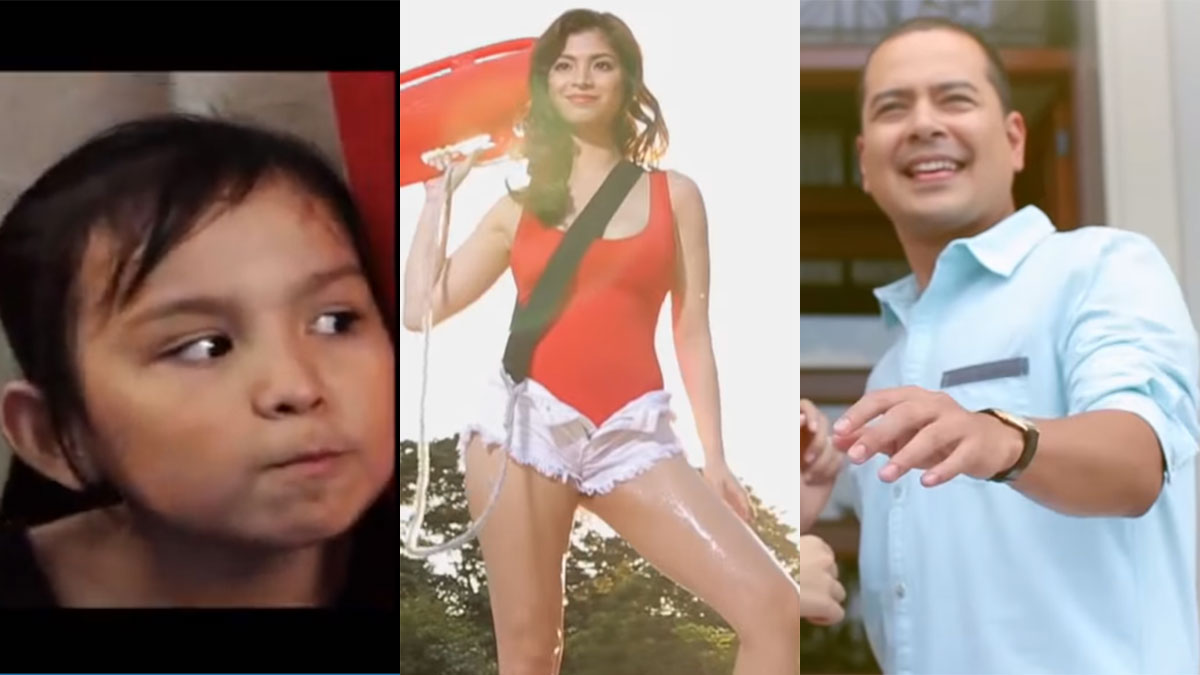 Kyline Alcantara, Angel Locsin, and John Lloyd Cruz are among the stars featured in ABS-CBN summer station IDs for the past 17 years.
PHOTO/S: ABS-CBN

Every year, the Kapamilya network kicks off summer with the release of its much-anticipated ABS-CBN summer station ID.

After being launched on national TV, the ABS-CBN summer station ID is usually uploaded simultaneously across its social media sites.

Fans eagerly await the launch in order to see all their favorite celebrities in one entertaining thematic video. This also brings together the celebrities who will be collaborating for a particular teleserye or TV show for that particular year.

ABS-CBN summer station IDs do not only showcase the network's homegrown talents, but they also become a way of welcoming new additions to the Kapamilya network. Viewers are also quick to point out the celebrities who have the longest exposure.

There were times in the past when a theme song became so popular that it was adopted as everyone's summer anthem.

Below is the list of all ABS-CBN summer station IDs that were produced in the past 17 years:

The love team of Judy Ann Santos and Piolo Pascual was also featured in the Kapamilya station ID.

The 2002 ABS-CBN summer station ID was the last appearance of Rico Yan in a SID before his untimely death on March 29, 2002.

This summer campaign showed the biggest Kapamilya stars having fun under the sun and using ordinary items as musical instruments.

Helmed by then-commercial director Onat Diaz, "Iba Ka-Summer ang Kapamilya" gave a fresh take on the usual summer activities. It was dubbed back then as the biggest station ID, bringing together 200 entertainment and news personalities.

Anne Curtis and Toni Gonzaga, who had just transferred from GMA-7, were given their time to shine in the station ID.

In 2007, ABS-CBN launched its "Araw Natin 'To" station ID that was directed by Paul Soriano.

This was the first summer station ID of Kim Chiu and Gerald Anderson who became popular during their stay in Pinoy Big Brother in 2006.

Kapamilya stars did cheerdancing moves to accompany the song "Boomtiyaya Boom" composed by Marcus Davis for the 2008 summer station ID. The summer campaign showed the biggest Kapamilya stars lounging by the pool and engaging in various summer activities.

The summer campaign showed celebrities building homes for the poor, cleaning a river, sweeping streets, feeding children, and other community activities while having fun under the sun.

The Kapamilya celebrities were grouped according to their respective TV projects. For instance, Lorna Tolentino, John Estrada, and Gabby Concepcion were shown together to represent their show Dahil May Isang Ikaw; Angel Locsin, Sam Milby, and Diether Ocampo for Only You; and ex-couple KC Concepcion and Piolo Pascual for Lovers in Paris.

Real-life couple Judy Ann Santos and Ryan Agoncillo were seen together in the station ID, which was launched a month before their wedding in May 2009.

For this year, the production design of ABS-CBN summer station ID employed the style of Art Attack of using various objects to create summer-themed collages.

It was also the first ABS-CBN summer station ID that featured advocacies such as Bantay Bata and Sagip Kapamilya.

The "Summer Ang Simula" campaign was based on ABS-CBN's "Ako Ang Simula" election campaign for the 2010 Presidential elections, with Ted Failon spearheading the campaign in the station ID.

Judy Ann Santos, who is the face of the 60 Years of Pinoy Soap Opera campaign that year, was shown in the last frame of the station ID.

Fresh from her Star Power victory in early 2011, Angeline Quinto was tapped by ABS-CBN to sing the theme song of the 2011 summer station ID, "Bida Best sa Tag-Araw."

Kapamilya stars engaged in extreme summer sports for this campaign. Sam Milby was shown doing a motocross race while Diether Ocampo did water sports. The ABS-CBN talents showed their creative poses while doing jumping up and down on a giant trampoline.

One of the highlights of the station ID was the duo of Kathryn Bernardo and Julia Montes, who starred that year in the successful drama series Mara Clara.

Enrique Gil was also in the station ID with former Kapamilya Lauren Young. Both worked together in Mula sa Puso.

Kim Chiu and Gerald Anderson, who were always seen together in station IDs, appeared separately this year, following the announcement of their love team's break up in late 2010.

Offering a taste of colorful Filipino traditions, the 2012 summer station ID showed the rich culture of the Philippines as reflected by various fiestas and festivals.

Sarah Geronimo and Gerald Anderson, who the tandem that top-billed two successful movies in 2011, interpreted the theme song for this station ID.

Some of the festivals featured were the Ati-Atihan festival, Lechon festival, and Bangus festival.

Richard Gomez, Dawn Zulueta, and Rita Avila—the stars of the drama series Walang Hanggan—were featured in this station ID. They became a source of memes online because of their controversial love triangle.

The team-ups of Julia Montes & Coco Martin of Walang Hanggan and JM de Guzman & Charee Pineda of Angelito: Batang Ama were highlighted in this station ID.

The summer campaign also showed the beauty of summer in the Philippines and why it is touted as one of the ultimate summer destinations for tourists.

In celebration of ABS-CBN’s 60th anniversary, this summer station ID depicted the history of the TV station.

Kathryn Bernardo and Daniel Padilla recreated a popular scene from ABS-CBN's phenomenal drama series Pangako Sa 'Yo. Two years later, the two were tapped to top-bill the remake of the series formerly headlined by Kristine Hermosa and Jericho Rosales.

Kim Chiu and Xian Lim portrayed Shan Cai and Dao Ming Si from the phenomenal Taiwanese drama, Meteor Garden, which was tagged as the first Chinovela of ABS-CBN.

ABS-CBN also incorporated some of the biggest trends that originated from the network such as "i-Dawn Zulueta mo ako," "Otso-Otso," and the "Pinoy Ako" dance.

"PINASmile," interpreted by the Kathniel love team of Kathryn Bernardo and Daniel Padilla, captured the genuine smiles of Pinoys.

Kapamilya stars and news personalities were tasked to be the smile seekers, and they traveled to various parts of the country to immortalize these blissful moments with their own cameras.

One of the highlights of the "PINASmile" station ID was when Ted Failon visited Tacloban. In late 2013, the city was hit by supertyphoon Yolanda.

This was the first Kapamilya station ID of Ellen Adarna after transferring from GMA-7.

For the 2015 summer station ID "Shine, Pilipinas," the theme song was performed by Liza Soberano and Enrique Gil. Back then, the LizQuen love team was fresh from the hit series, Forevermore.

The ABS-CBN station ID showed how Filipinos express their love and how it gives Filipinos the strength to smile through difficult times. The song also served as a battle cry that urged Filipinos to keep the fire burning and move to the beat of positivity. Eric Po and Lloyd Oliver Corpuz wrote the theme song, with music composed and produced by Marcus and Amber Davis.

It was the first station ID of Isabelle Daza, who just transferred to ABS-CBN after a long stay in GMA-7.

John Lloyd Cruz and Toni Gonzaga, the lead stars of the sitcom Home Sweetie Home, were seen together in the 2015 ABS-CBN summer station ID.

For the first time, the ABS-CBN's station ID revolved around the elections and not on the usual summer entertainment.

The election-themed station ID urged voters to make a sound decision in choosing their candidates, saying that the Filipino family should, first and foremost, come out as the winner.

The rap part of the song was done by new Kapamilya, Elmo Magalona, who joined the ranks of ABS-CBN singers such as Sarah Geronimo and Piolo Pascual.

Some of the ordinary people featured in the station ID were: a nun who rocks a guitar, a colorful water vendor, and a senior-aged man who entertains pedestrians with his bamboo flute. They were interviewed by Kapamilya stars Vice Ganda, Sharon Cuneta, and Toni Gonzaga.

The station ID showed summer activities of Filipino families. These include a quick trip to the city zoo, a refreshing dip in a pool, or a bite of your favorite street food.

The 2018 Kapamilya summer station ID encouraged Filipinos to spread love in any way they can.

The theme song was performed by It's Showtime hosts Vice Ganda and Anne Curtis, along with other Kapamilya singers.

This 2019, ABS-CBN’s summer station ID veered away from having extravagant production numbers but still kept the strong message of spreading love.

Former Kapuso Regine Velasquez performed the song "Summer is Love" along with fellow Idol Philippines judges Vice Ganda, James Reid, and Moira Dela Torre. This is the second ABS-CBN station ID of Regine as a Kapamilya.

The summer 2019 station ID theme song was composed by Yumi Lacsamana and Thyro Alfaro, with words by Robert Labayen and Lloyd Oliver Corpuz, and additional rap lyrics by Thyro and Yumi.

This station ID kept it simple by shooting celebrities who wore t-shirts and simply danced to the tune of the upbeat theme song.

PEPsters, which ABS-CBN station ID is your favorite?