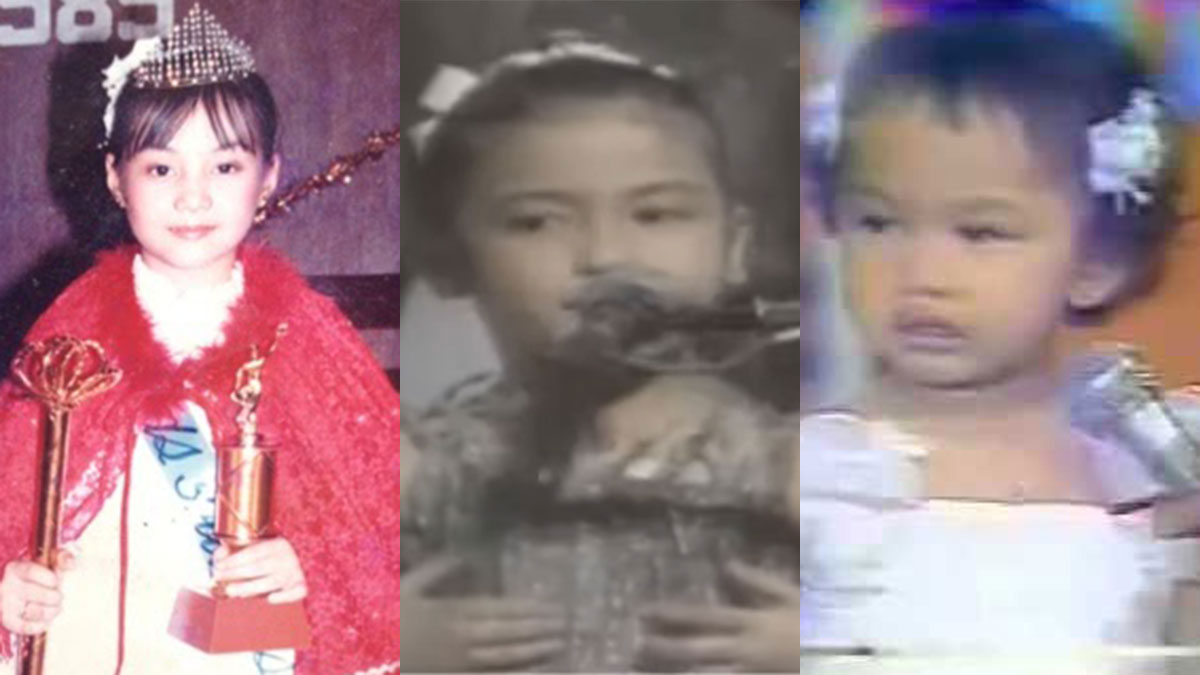 Can you guess who are these three celebrities who joined Eat Bulaga's Little Miss Philippines in the past?
PHOTO/S: @iamgladysreyes on Instagram / Eat Bulaga!

The Little Miss Philippines pageant of Eat Bulaga! is set to make a comeback this 2019.

Since the pageant began in the 1980s, the Little Miss Philippines pageant has discovered kids who eventually established themselves in the entertainment industry as actresses, TV hosts, and beauty queens.

Now that Little Miss Philippines is set to make a comeback after five years, PEP.ph (Philippine Entertainment Portal) looks back at some graduates who were able to make a name in showbiz.

Gladys Reyes joined the Little Miss Philippines pageant in 1984. It was the first-ever edition of the Eat Bulaga! pageant.

After joining Little Miss Philippines, Gladys was given bit roles in movies. In the 1986 movie Nakagapos na Puso, she played the young Lorna Tolentino.

In 1992, the then 15-year-old Gladys got her big break on television when she was tapped to play the main villain in ABS-CBN's afternoon drama series, Mara Clara, alongside Judy Ann Santos.

Her portrayal as Clara was well-applauded that it made Gladys a perennial kontrabida in most of her TV shows. Through this show, she formed a friendship with Judy Ann and GLadys met her future husband, Christopher Roxas.

After Mara Clara, in 1997, Gladys transferred to GMA-7 and VIVA, which allowed her to appear in the youth-oriented series TGIS and the prime-time shows Ikaw Na Sana and Ganyan Kita Kamahal.

Since then, Gladys was tapped by both ABS-CBN and GMA-7 to play the kontrabida in their teleseryes.

In 2004, Gladys married Christopher, and they currently have three children.

Gladys's last teleserye was the prime-time series TODA One I Love. She also continues to host her talk show MOMents, aired on NET 25.

She is running a restaurant with Christoper called Estela. 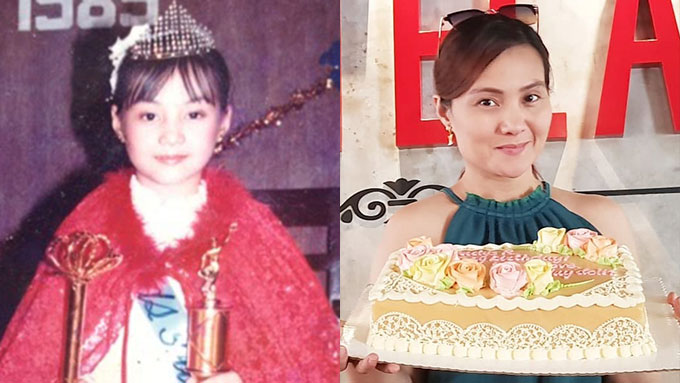 Ice Seguerra, formerly known as Aiza Seguerra, started her career as a contestant of Little Miss Philippines in 1987, where she placed fourth runner-up.

Despite not winning the pageant, Ice's career as a child star still flourished when she was tapped to become a regular in Eat Bulaga! She was also able to do sitcoms with Vic Sotto, like Okay Ka, Fairy Ko!, among many others.

In her teenage years, Aiza pursued a career in music, with her single "Pagdating ng Panahon" topping Philippine charts in 2001.

In 2007, Aiza became more open to the public about his sexual preference as a lesbian. He said in a 2007 interview, "I don't think it's really a choice if you decide to be gay or not. It's more of deciding to live in a closet or to come out in the open. Kasi naniniwala ako na ever since, I had it in me. Siguro different lang for other people. But sa akin, bata pa lang ako, alam ko na."

In 2012, Aiza was tapped to play Jodi Sta. Maria's elder sister in the daytime series Be Careful With My Heart, which aired for more than two years.

In 2014, Ice proposed to his girlfriend, Liza Dino. In that same year, he said in an interview that he now identifies himself as a transgender man. In December that year, Ice and Liza got married in San Francisco.

In February 2018, he officially started using Ice as his name. A month later, Ice resigned from his government post as National Youth Commission chairperson.

To date, Ice continues to support his wife Liza in her projects as the chairman of the Film Development Council of the Philippines. 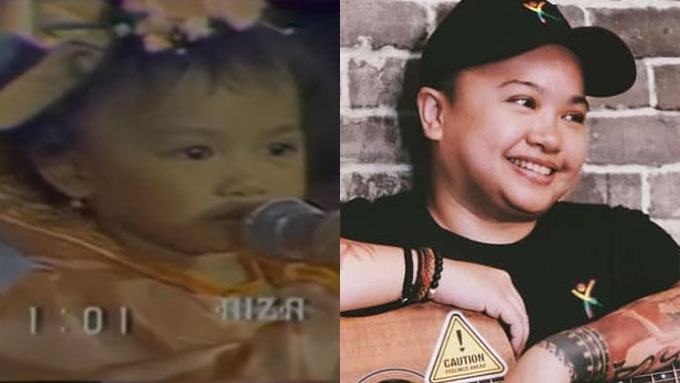 Years after her Little Miss Philippines stint, Jessa became a member of That's Entertainment. She then became part of several movies and TV shows such as GMA-7's Villa Quintana in 1995.

The popularity of these two songs led to Jessa being tapped to be the lead actress in TV shows and in movies. In 1999, GMA-7 tapped Jessa to top-bill the first network-produced series, Di Ba't Ikaw, where she figured in a love triangle with Jao Mapa and Jomari Yllana. The series aired from May to October 1999.

In that same year, Jessa top-billed the movie titled Bakit Pa?, where she was paired with Troy Montero.

In 2003, in the middle of doing the ABS-CBN series Bituin, Jessa left the show when she got pregnant with her first daughter, Jayda Avanzado.

Jessa and Dingdong later settled in the United States in 2007, but she returned to showbiz in 2009 to do the prime-time series Rosalinda.

At present, Jessa continues to do the sitcom Pepito Manaloto in GMA-7, while doing occasional guest appearances in ABS-CBN's ASAP and other musical-variety shows. 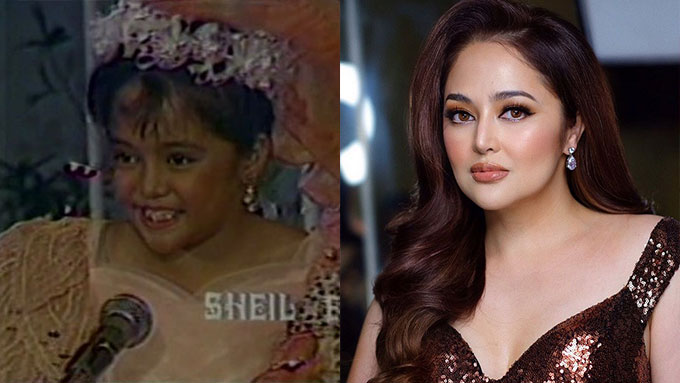 In 2003, Francine joined Binibining Pilipinas, where she reached the Top 12.

She then joined the GMA-7 sitcom All Together Now in the same year.

Francine was tapped to do teleseryes with the Kapuso network. Her biggest role in a drama series was the role of Avria in the prime-time series Etheria: Ang Ika-Limang Kaharian ng Encantadia.

Francine's last teleserye was the afternoon series Haplos in 2017.

She will be a part of the upcoming GMA-7 afternoon series, Hanggang Sa Dulo Ng Buhay Ko. 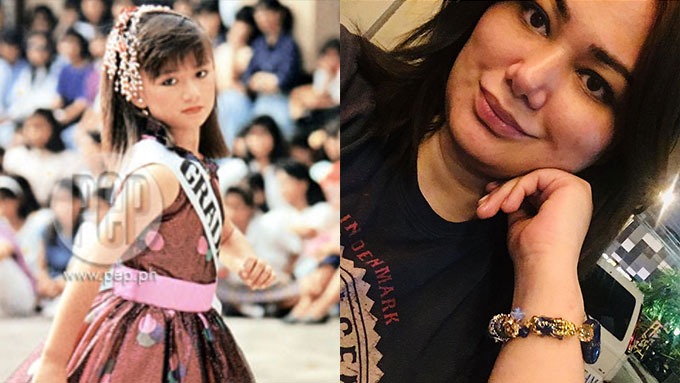 Camille Prats joined the Little Miss Philippines pageant in 1990. She may not have won the pageant, but her exposure earned her a stint in ABS-CBN's kiddie gag show, Ang TV.

In 1995, Camille played the lead role in the movie Sarah… Ang Munting Prinsesa, a Filipino adaptation of the 1985 Nippon anime, Princess Sarah, which aired on ABS-CBN. Both the movie and the cartoon series was based on the children's novel A Little Princess.

When Camille reached her teenage years, she was cast as the lead actress in the youth-oriented series G-Mik, together with Sarah… Ang Munting Prinsesa co-star, Angelica Panganiban.

During her G-Mik days, Camille was first paired with Stefano Mori, and later with Danilo Barrios.

In 2005, Camille started to veer away from her Princess Sarah image to do mature roles. By this time, she transferred to GMA-7 via TAPE Inc.'s afternoon series, Kung Mamahalin Mo Lang Ako.

This was followed by several more teleseryes with the Kapuso network, including a leading lady role in the 2006 adaptation of Captain Barbell, starring Richard Gutierrez.

In 2007, news broke that Camille was pregnant. The following year, she got married to Anthony Linsangan. However, Anthony succumbed to throat cancer in 2011.

After a year of being a widow, Camille found a second chance at love when she reconnected with her former schoolmate, VJ Yambao.

Camille is now pregnant with her third child, but before she takes a maternity leave, she will be appearing in the pilot episode of her upcoming GMA-7 talk show, Mars Pa More, with Iya Villania. 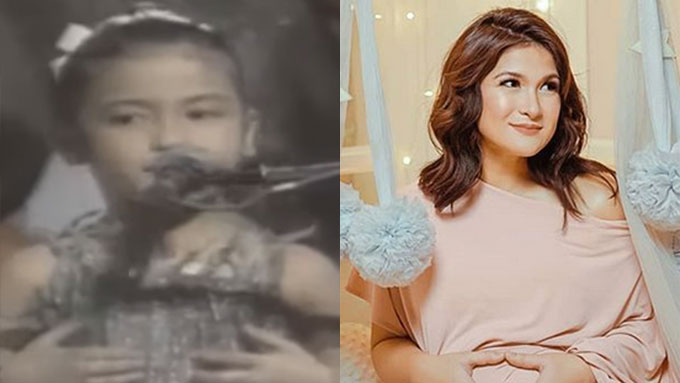 Pauleen Luna joined Little Miss Philippines in 1995. However, she did not make it to the grand finals since she lost in the daily rounds.

In 2002, Pauleen began her career as a teen star when she became part of ABS-CBN's Star Magic.

After being introduced in the youth-oriented series Berks, Pauleen received a major role in the prime-time series Marina with Claudine Barretto in 2004. Pauleen was also part of the sitcom Bora and the reality love-team search, Qpids, in 2005.

When she got eliminated in Qpids, which aired on a Sunday, the next Monday, she was already a Kapuso and one of the co-hosts of Eat Bulaga!

At the time, Pauleen had a supporting role in the afternoon series Now and Forever: Agos while being part of the prime-time series Etheria: Ang Ika-Limang Kaharian ng Encantadia. In addition to this, she was included in the QTV weekly series My Guardian Abby with Nadine Samonte.

GMA-7 eventually groomed Pauleen to become a kontrabida in the network's teleseryes.

In November 2017, Pauleen gave birth to their baby named Tali. 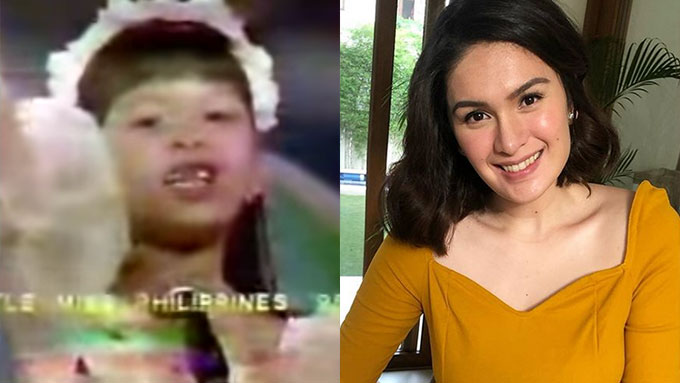 Julie Anne San Jose recently posted on Instagram a video clip of her performance when she joined Little Miss Philippines in 1998. However, she did not win the contest.

In 2005, the 11-year-old Julie Anne tried her luck again via QTV's singing competition, Popstar Kids. She was able to join the grand finals, but lost the grand prize to Rita Daniela. GMA-7 continued to groom Julie Anne, Rita, and other finalists of Popstar Kids via the singing group Sugarpop.

Julie Anne continues to be one of GMA-7's prime singers up to this day. The Kapuso network gave her the chance to show her acting chops when she was assigned to top-bill several Kapuso teleseryes such as Kahit Nasaan Ka Man (2013), Pinulot Ka Lang Sa Lupa (2017), and My Guitar Princess (2018).

At present, Julie is part of GMA-7's musical-variety program Studio 7. She is also preparing for her concert at the Solaire titled Julie Sings The Divas. 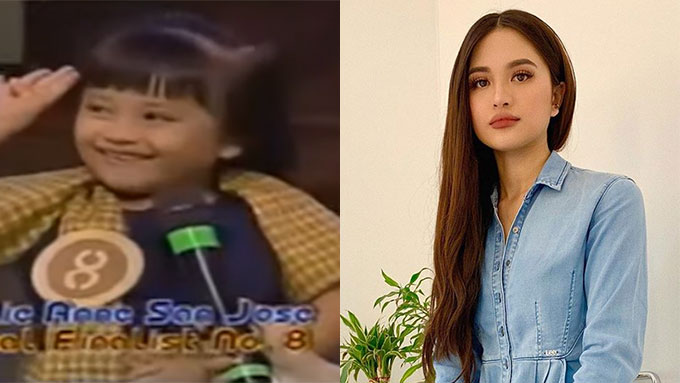 After her stint in the Little Miss Philippines pageant, Kim landed a bit role in the GMA mini-series titled Munting Anghel, top-billed by then child actress Isabelle de Leon.

In 2014, Kim became popular because of her "Twerk It Like Miley" Dubsmash video. This paved the way for her to be discovered by GMA-7 bigwigs who offered her to sign an exclusive contract in 2015. Since then, Kim has been a regular cast member of the comedy gag-show Bubble Gang.

Kim was supposed to be part of the afternoon series Bihag, but she had to beg off. According to a PEP Alerts report, the role was too sexy for Kim. 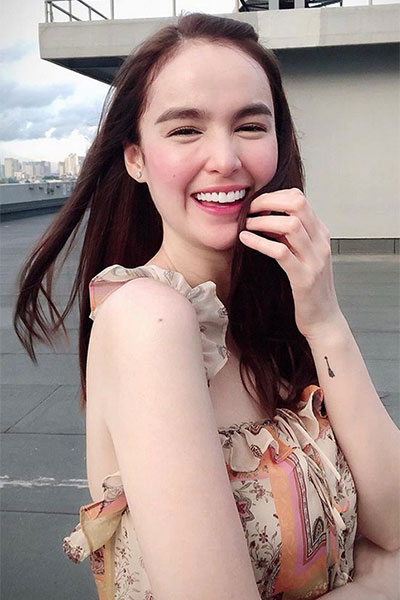 Ella Cruz joined the Little Miss Philippines pageant in 2005. However, she did not reach the grand finals.

Through this contest, GMA-7 bigwigs noticed her, and she was tapped to play the young Angel Locsin in the 2006 fantasy series Majika.

A year later, Ella played the lead role in the fantasy series Super Twins, along with Nicole Dulalia. Nadine Samonte played the superhero counterpart of Ella in the series.

After Super Twins, Ella played the young version of Marian Rivera in MariMar in 2007.

In 2008, Ella was supposed to transfer to ABS-CBN to do the title role in its remake of Annaliza. However, the project was shelved.

Ella was then given kontrabida roles in GMA-7.

In 2012, Ella was praised for her portrayal as the young Cristine Reyes in the ABS-CBN drama series Dahil sa Pag-ibig. The Kapamilya network then decided to give Ella a title role in the early prime-time series Aryana, which ran for eight months.

In 2015, Ella left Star Magic to transfer to VIVA Artists Agency. Since then, she was able to do guest appearances in drama anthologies of ABS-CBN, GMA-7, and TV5.

Ella is known for doing dance covers. Her dance videos of "Twerk It Like Miley" and "Dessert" became viral hits online. 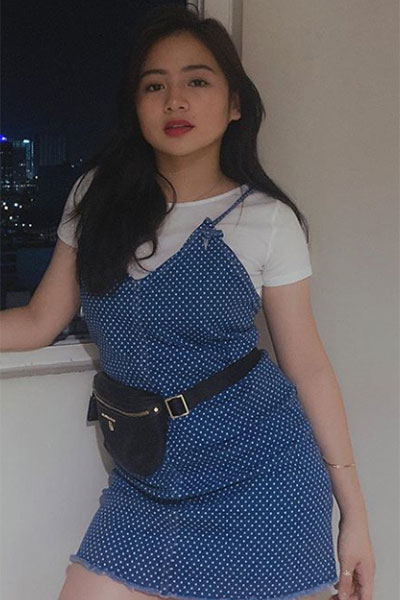 Ryzza was then immediately included in the Eat Bulaga! roster of hosts, and was given her own talk show titled The Ryzza Mae Dizon Show.

In 2015, Ryzza headlined the daytime series Princess In The Palace with Eula Valdes and Aiza Seguerra.

Ryzza remains to be part of Eat Bulaga! up to this day. 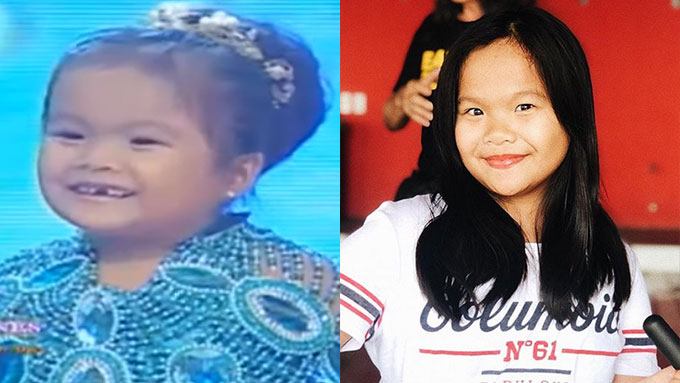