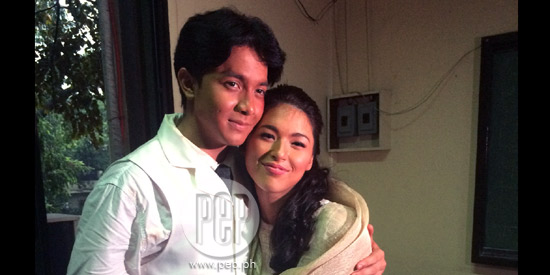 "I wanna share my success to the people who believe in me, my family, of course, GMA. I don't take success for myself alone."

It's statements like these that set Alden Richards in a special class of his own. And it's probably the reason he is getting the choice projects he is getting today.

His latest TV project Ilustrado has him playing the lead role of Jose Rizal. He is by far the youngest Filipino actor to play our national hero. Dubbed as a "bayani-serye," Ilustrado will air its pilot episode by October 20 on the GMA-7's primetime block.

His journey thus far has him front and center in two big projects on GMA Primetime. Ilustrado makes Alden part of a landmark project. His hosting gig alongside Asia's songbird Regine Velasquez-Alcasid for Bet ng Bayan makes him part of the Kapuso Network's widest "grassroots-level" reality talent search. These two projects alone make him a mainstay on the Kapuso primetime block for weekdays and weekends, to boot.

How is he handling the pressure?

Very candidly, the 21-year-old actor-TV host admits, "I work at my best when I am under pressure. So, the more na maraming pressure, mas gusto ko nga yung may pressure. I see to it na gusto ko ma-please lahat although we know na hindi naman possible yun. But the thing is, that's the thing that keeps me going and that's what, yung ang nakikita ko na points ko para mag-improve in my craft."

Right now, he feels that he is up to the challenge of portraying Jose Rizal in Ilustrado. His words are, "reading-ready na, yung challenge doon is paano ko mabibigyan ng sariling flavor si Rizal."

He shares what he has been doing to reach this reinvention.

He did not study Spanish for the role as the producers of Ilustrado felt it would alienate the primarily masa viewer block to have Alden speak in Spanish.

While he is proud of and challenged by the fact that "ako yung pinakabata to do Rizal," he tells us what the main objective of this project is, "to humanize Rizal, the character of Rizal. To showcase the... Kasi when I saw the movies na ginawa sa buhay ni Rizal, lahat yun kabayanihan ni Rizal, heroism. When he studied sa Spain to be an ilustrado to fight for his country, his love for the girls like Leonor Rivera, andoon, e. Now the way I see it and compared doon sa other projects medyo, maliliit lang yung hint of Rizal being a person with feelings, with emotions na hindi lang siya hero. Si Rizal, may konting landi, si Rizal may konting pagkarebelde."

How historically accurate is Ilustrado?

Given that fictional characters have been woven into the story alongside the real ones, characters like Jaclyn Jose's Conchita Monteverde and Polo Ravales' Venchito Monteverde, how accurate can it still be?

Alden explains, "In Rizal's life, napakaraming kontrabida. So it's really hard to showcase a lot of kontrabidas in a short span of time. We only have 20 episodes to air. So better na we condense it into different characters pero showcasing how Rizal underwent those pagpapahirap nila. So, in terms of accuracy, we see to it, every scene counts, and every scene must be by history and ultimo sa props. I would say this is a 90% accurate project and also doon sa buhay ni Rizal."