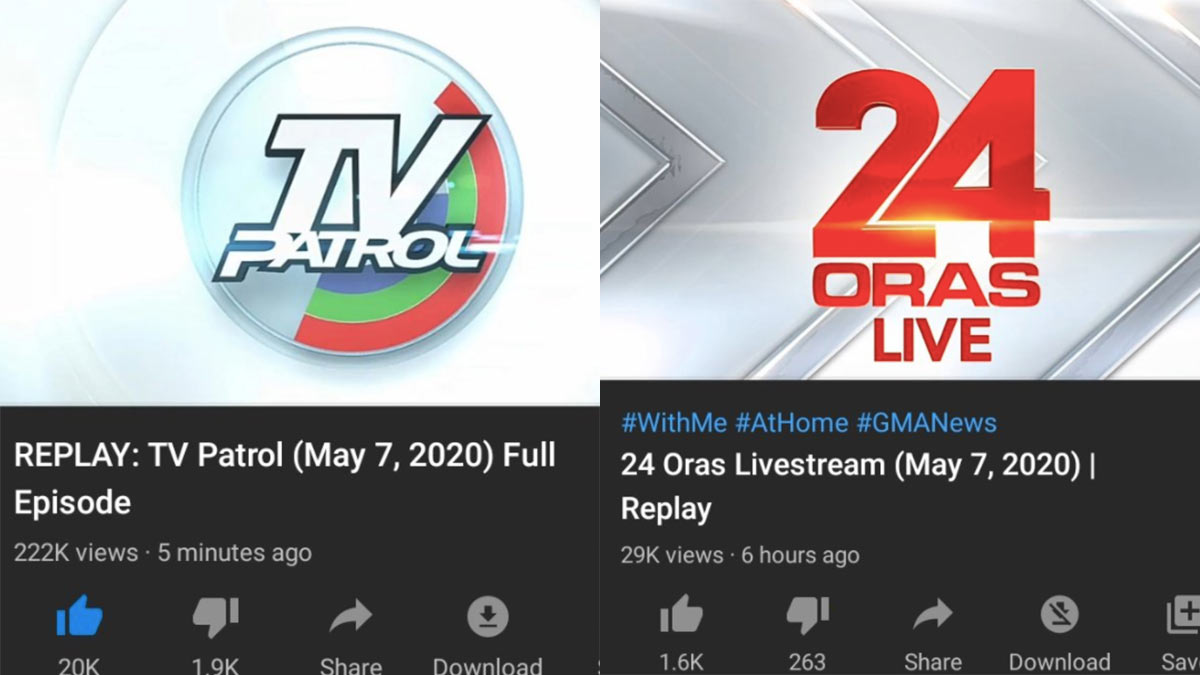 Netizens compare the online streaming views of TV Patrol and 24 Oras today, May 7, which trended on Twitter. May 7 marked TV Patrol's comeback to broadcast on ABS-CBN's social media platforms and on ANC one day after being shut down on television.
PHOTO/S: Screenshot from @KIKOMARTIR on Twitter

TV Patrol returning a day after going off-air tops the trending topics on Twitter today, May 7, 2020.

Its farewell episode on May 5 is still fresh in the minds of Philippine television viewers.

But as news anchor Bernadette Sembrano says in her closing spiel, the flagship newscast of ABS-CBN resumes its operations via other platforms.

Kapamilya fans are happy, and its online streaming gets more than 230,000 real-time viewers.

Some tweets compare the online viewership.

A Kapamilya fan posts screenshots of TV Patrol and 24 Oras' streams, and writes: "120k viewers for ABS and 12k viewers for GMA. And I thought many people will boycott ABS because of 'legal' issues? Nga-nga kayo noh ha! #tvpatrol #IStandWithABSCBN #DefendPressFreedom"

Meanwhile, Kapuso fans point out that 24 Oras has fewer viewers online since it remains on air on TV.

Those who are neither Kapamilya nor Kapuso put more value on the public service work by both TV Patrol and 24 Oras than on their number of views online.

But in general, most tweets are about the return of TV Patrol via online platforms.

Here are some of their tweets:

Some also noted that Bernadette did the "rock on" sign at TV Patrol's closing.

ABS-CBN GOES OFF THE AIR

On the afternoon of May 5, the National Telecommunications Commission (NTC) issued a Cease and Desist order against the Kapamilya network following the expiration of its congressional franchise.

The applications for franchise renewal are with Congress, which ran out of time—or the political will—to decide on them.

The ABS-CBN franchise issue is connected, at its core, to the network's struggle with President Rodrigo Duterte.

NTC also said that ABS-CBN and its executives have been given ten days upon receipt of the order to explain why their frequencies should not be recalled.

TV Patrol was the last program to air before ABS-CBN stopped its broadcast.