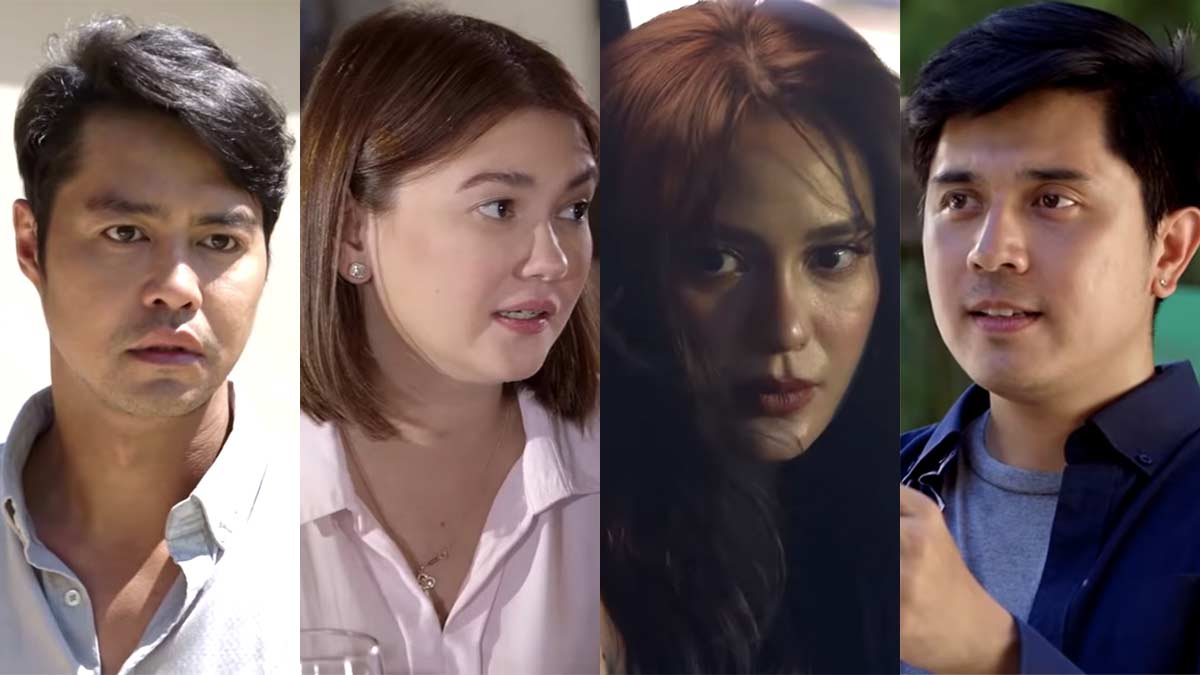 ABS-CBN is gearing up for the launch of a new teleserye.

Based on the teaser, Angelica and Paulo play an ex-couple who have a son.

Angelica has moved on with Zanjoe’s character, while Paulo is dating Arci. However, it seems he is still in love with Angelica’s character.

The four characters find themselves in the midst of a crisis when Angelica and Paulo’s son goes missing.

Jake’s character is shown as the kidnapper of Angelica and Paulo’s son.

Walang Hanggang Paalam is the second teleserye that ABS-CBN has launched since its free TV franchise was killed by Congress.

The series is set to air on ABS-CBN’s new broadcast platforms: the cable channel Kapamilya Channel and its online broadcast Kapamilya Online Live.

Previous reports from PEP Troika and other publications revealed that Walang Hanggang Paalam is the replacement of the ABS-CBN series, Burado.

The series, which was supposed to star Julia Montes, Nadine Lustre, and Thai actor Denkhun Ngamnet with Zanjoe and Paulo, had its story conference in February 2020.

Tapings had started in Thailand sometime in March 2020 before the COVID-19 outbreak.

In June 2020, before ABS-CBN decided to push through a lock-in taping for the series, there were reports that Julia and Nadine had backed out of the project. They were replaced by Angelica and Arci.

ABS-CBN and Burado’s producer, Dreamscape Entertainment, kept mum about the developments of the project.

In August 2020, Dreamscape Entertainment announced that Burado was shelved.

In a statement, the producer said that its “pre-pandemic concept,” which featured action scenes, cannot be mounted at this time because of the production safety guidelines that are currently in place.

Furthermore, it might be impossible for Denkhun to participate in the show because he “cannot be flown in due to the pandemic.”

Walang Hanggang Paalam is the teleserye comeback of Arci Munoz after her controversial exit from another prime-time series, Pamilya Ko.

Known as the leading lady of JM de Guzman, Arci’s character was suddenly killed in the middle of the show’s run.

Rumors then floated that Arci was axed because of an attitude problem.

However, Arci denied the rumors, saying that she just wanted to prioritize the five other projects on her plate this 2020.

The show also reunites the four actors who have previously worked together.

Angelica and Zanjoe were last seen in the daytime teleserye Playhouse.

Paulo and Angelica first worked together in the movie The Unmarried Wife in 2016.

As for Arci and Paulo, they share a history beyond their time in the Kapamilya network.

They are both products of GMA-7’s StarStruck in different seasons: Arci came from season three while Paulo was part of season four.

They previously worked together in an episode of GMA-7’s Dear Friend in 2010.

ABS-CBN has yet to announce the airing date and time slot of Walang Hanggang Paalam.

Among the shows that are currently airing, two of them—Love Thy Woman and A Soldier’s Heart—are about to end.

Love Thy Woman will be replaced by reruns of the 2017 prime-time series The Good Son, while ABS-CBN has not announced which show will replace A Soldier’s Heart.