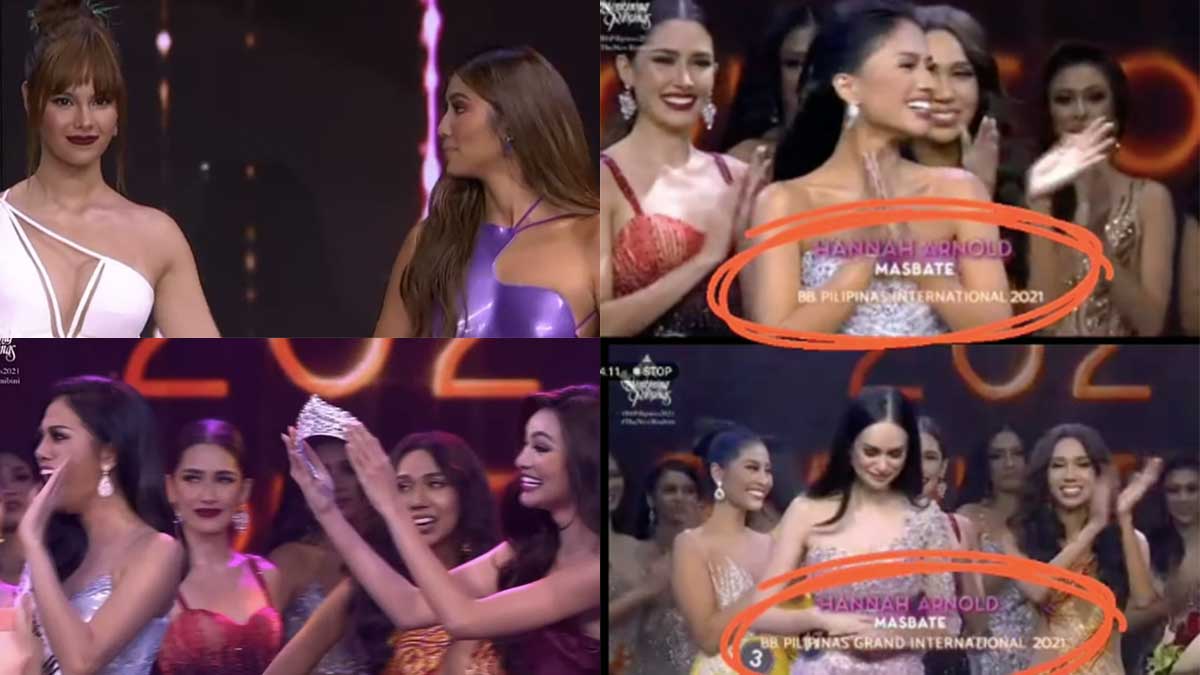 As missteps and slipups can happen in any live show, the coronation night of Binibining Pilipinas 2021 had its share of bloopers on stage.

One such moment was when host Catriona Gray said “Venezuela” instead of “Valenzuela” in introducing the finalist from Valenzuela City.

The Miss Universe 2018 titleholder, along with Miss Grand International 2016 first runner-up Nicole Cordoves, did a good job as hosts.

The first live edition of the pageant from start to finish deserved a thumbs up. In the past, the grand finals had delayed telecasts, except for the part when the winners were announced.

The bloopers were somewhat inevitable, and some were posted on social media, particularly on TikTok!, righat after the show that happened on July 11.

1. Catriona Gray nudging Nicole Cordoves to prompt her about her spiels.

The two beauty queens took turns when they introduced the panel of judges.

And one time Nicole seemed to have missed her cue, Catriona had to tap her waist to alert her, as shown in the TikTok video posted by @heyutuc.

Catriona tried to be discreet, smiling and looking at the camera while tapping Nicole. However, her hand movement was captured on cam!

Worse, based on her facial expression, it took a few seconds for Nicole to register what Catriona was trying to tell her. She quickly turned the moment around and delivered her spiels flawlessly.

She even flipped her hair when she mentioned Pinky Webb’s name, emulating Pinky’s famous gesture during her CNN interview of Presidential Spokesperson Harry Roque.

2. Catriona Gray shouting out “Albay” during the Top 13 announcement.

As the host of the coronation night, Catriona was tasked to announce the names of the finalists who made it to the Top 13.

One was Jashmin Dimaculangan, a candidate who hails from Albay, which happens to be Catriona’s hometown.

TikTok user @alginepot27 noticed the big smile on Catriona’s face and excitement when she said “Albay” during the announcement.

The netizen also edited the video to show a clip of Catriona exclaiming “Albay” during her Binibining Pilipinas 2018 bid.

TikTok user @jinesco noticed how Binibining Pilipinas 2021 host Catriona and Miss Universe 2020 host Olivia Culpo both used the the words “top,” instead of “spot,” during the announcement of the semi-finalists.

Catriona said, “The next top… spot in our Top 12 belongs to…”

However, she kept her composure as she continued to finish her spiel without feeling embarrassed.

In the case of Olivia, she drew more attention to her faux pas when she laughed and stressed the word “spot” to show she finally got it right.

4. Catriona Gray forgetting it wasn't her job to look for the missing number identifying a candidate. Where were the stagehands?

During the question and answer portion, Catriona and Nicole called each finalist by the identifying number that was pinned on her gown.

However, when it was the turn of Oriental Mindoro’s Graciella Lehmann to be called, her gown had no number pinned on it.

Instead of a stagehand coming to the rescue, Catriona went out of her way to go over the candidate's gown in search of the missing number, but to no avail.

Giving up, Catriona proceeded to introduce the candidate by describing her gown: “Next stop, we have the binibini in the flaming orange dress.”

Nicole, who was at the teleprompter while Catriona was looking for the missing number, was able to announce the candidate's name properly.

Apparently, when Graciella took to the stage, her number was not pinned on her gown.

Few bloopers also happened during the announcement of winners.

One such incident was the crowning moment of Binibining Pilipinas Intercontinental Cinderella Faye “Cindy” Obenita that she almost missed!

After Binibining Pilipinas Intercontinental 2019 Emma Tiglao place the winning sash around her successor, Cindy got so excited she made a move toward the front stage to do her beauty queen wave as Emma was about to pass on the crown to her!

Emma immediately called Cindy, who mouthed an apologetic “sorry” with a smile.

Cinderella in fairy tale has to be home by midnight when she loses the magic of the wand that has turned her into a princess.

Binibining Pilipinas’ coronation night ended at past 12 midnight on July 11.

Just before the live show ended, a blooper made the announcement of top crown winner anticlimactic!

For every announcement, a chargen showing the name of the winner was shown during the crowning moment.

However, when Samantha Panlilo was announced as the winner of Binibining Pilipinas Grand International, it was the name of Hannah Arnold that appeared on the chargen!

It was a major boo-boo that diminished a once-in-a-lifetime moment for Hannah when she was announced the winner of Binibining Pilipinas International crown.

? happier x this side of paradise - Chuu.