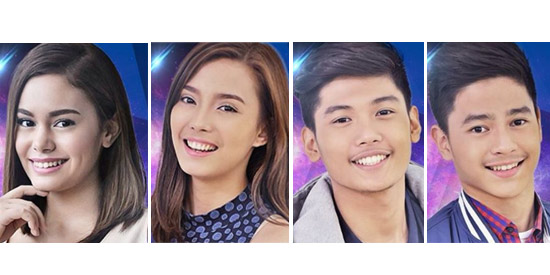 Showbiz royalty were shown trying to get their big break through StarStruck VI.

Viewers saw that Frederick, the son of Eric Fructuoso, was not chosen as a finalist of GMA-7's artista search.


FAITH DA SILVA. Faith Da Silva, 15, is the daughter of former actor Dennis Da Silva. In 2002, her father was put in jail and until now, Faith has not seen her father in person.

Faith had tears in her eyes as she admitted, "Masakit po sa akin yun."

Faith will find out if she goes through the next round by this Friday, September 11.


FREDERICK FRUCTUOSO. A child of a '90s matinee idol tried his luck during this batch.

Frederick, the son of Gwapings member Eric Fructuoso, was one of the Top 35.

The contestant from Paranaque recalled that his parents separated when he was still a young boy.

However, he failed to enter the Final 14.


MARIAM AL-ALAWI. Mariam Al-Alawi, the older sister of Mona Louise Rey also wants to get her big break in showbiz.

The 18-year-old contestant from Sta. Mesa, Manila said her youngest sister was delighted to know that she auditioned for StarStruck.

Mariam had a prosperous life in Bahrain but her fortunes changed when she followed her mother to the Philippines.

Mariam cried when she learned that she would move on to the next round.

She is the third female contestant to make it after Klea Pineda and Koreen Medina.

She will learn her fate during the live broadcast on September 11.

Born in Bacolod, Migo was 6 years old when he started joining singing contests in Australia.

He landed a part in the Australian version of Glee, which even toured in the United States.


Migo recalled, "They were looking for triple threats: people who could act, sing and dance.

"I was the only Filipino there. Everyone else was Australian."

Just like other contestants, his result will be revealed on September 11.


ANALYN BARRO. This girl was born in Ormoc native but she chose to audition in Bacolod.

Analyn Barro revealed it was her first time to visit Manila.

She showcase her talent in singing by giving her rendition of "Titanium."

Analyn is the fourth female hopeful to enter the Final 14.


MARION GARCIA. The boy from Angeles City, Pampanga said he joined the competition for his late father.

His voice broke as he continued, "It's also my chance to say sorry kasi may mga bagay akong hindi ko napakita sa iyo...na mahal na mahal kita. I won't let you down."

When he learned that he succeeded, Marion exclaimed, "Pa, thank you!"

He is the second male finalist after Avery Paraiso.


ELYSON DE DIOS. This Cebu native revealed that his friends call him "Bugoy."

When asked if he likes being described as a lookalike of Piolo Pascual, Elyson hesitated before answering, "Opo, gusto ko po."

He added with a smile, "Gwapo kasi."

Elyson is now part of the Final 14.


BEATRIZ IMPERIAL. This girl from Rizal wants to join StarStruck in order to find her father whom she has not seen for a long time.

On September 11, Beatriz will know if she will join the Final 14 or not.


(To find out what happened during the first telecast, read: RECAP: StarStruck VI pilot episode)