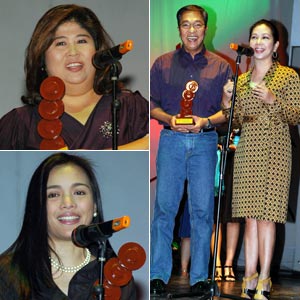 
Students of the University of the Philippines Los Baños recently hosted the Gandingan 2009: UPLB Isko't Iska's Broadcast Choice Awards. Now on its third edition, this is the first award-giving ceremony in the field of broadcasting instituted by Community Broadcasters' Society of UPLB.


Founded in 2007, the Gandingan is the first and only UP-based awards that aims to recognize outstanding broadcasters and broadcast programs in the country chosen by UPLB students.

"This award is an inspiration for the whole ABS-CBN management. We assure you that we in ABS-CBN give importance to this recognition. We are honored to receive the Best Station of the Year for three straight years and we are looking forward to being here again next year," said ABS-CBN Production Development and Control Head Linggit Tan, who received the Best TV Station of the Year award in behalf of the Lopez-owned network.

One of its hosts, Howie Severino, won the Best Documentary Filmmaker award.

Here is the list of winners for the Gandingan 2009: UPLB Isko't Iska's Broadcast Choice Awards.