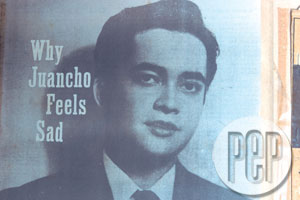 Among the movie projects that Gloria and Juancho worked on together were Ang Sumpaan Natin, which featured footage from their wedding, and Hong Kong Holiday. They also co-starred in the radio show Hani Hani Mun, where the supporting cast included Dolphy, who would later come to be known as the comedy king.

Juancho Gutierrez, the 1960’s screen heartthrob known as Mr. Number 1, died on October 2 from multiple organ failure. He was 73.

In their heyday, Gloria Romero and Juancho Gutierrez were considered local tinseltown’s most glamorous couple.

When Gloria first laid eyes on Juancho, she was the reigning queen of Sampaguita Pictures, not to mention Philippine movies.

He was the one of the new kids on the block, teamed up with Miss Number 1, Amalia Fuentes.

“My mom was working in Sampaguita,” Maritess relates. “My dad arrived in a car. He was wearing a pink shirt and white pants. Sa malayo, my mom said, ‘Sino ‘yan?”

For the movie queen, it was love at first sight. As Maritess tells it, her mom was then moved to comment: “Ang guwapo naman niyan. ‘Yan ang magiging asawa ko.”

The couple married in 1960 but separated 12 years later. During their separation, Juancho stayed with his sister Cristeta in Mandaluyong. In 2000, Juancho suffered a diabetic stroke that left him paralyzed—and reunited him with his estranged wife.

When her dad had the stroke, maritess had told her mom: “Ma, kunin muna natin si Daddy.” Right away, her mom replied: “Sige, iha.”

Maritess’ own relationship with her father got better. “The last few years, medyo nakabawi. With me and my dad kasi, more of barkada kami. So walang father-daughter ganyan. Barkada.”

The reconciliation also strengthened the bond between Juancho and Christopher, who helped take care of his ailing grandfather. “Nag-a-I-love-you-I-love-you ang dalawang ‘yan. My dad is not demonstrative masyado. But with Chris, silang dalawa: ‘I love you, Lolo.’ ‘I love you, iho.’”