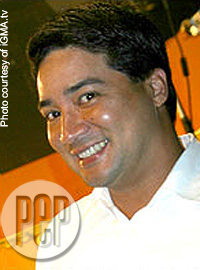 “There was no offer, no money involved,” says Anjo in an exclusive interview with Philippine Entertainment Portal (PEP) last October 27, Friday, at the Crowne Plaza hotel in Quezon City.

In the tabloid Remate, dated October 20, entertainment columnist Julie Bonifacio wrote that Anjo, a first-termer, was scheduled to run again for vice-mayor, alongside Joey Marquez for congressman and Dr. Pablo Olivarez for mayor.

Anjo says that, indeed, Joey and his ex-wife, Alma Moreno, talked to him to run, not for vice-mayor, but for mayor. In that lineup, Dr. Olivarez is supposed to run for congressman, Anjo adds.

Joey and Alma are Anjo’s godparents at his wedding to former actress Jackie Manzano. Dr. Olivarez is a former mayor of Parañaque and is considered a political heavyweight in a city with 248,098 registered voters (National Statistical Coordination Board website, 2004).

“They [Joey and Alma] wanted me to run for mayor,” explains Anjo. “It was Joey first. As early as last year, he was very vocal, he wanted me to run [for mayor]. Of course, ako naman, I was flattered. But, again, I was not decided. Because feeling ko kasi, I don’t know what I’m getting into.”

He adds, “I considered the offer, me running for mayor. But there was no commitment. I played with the idea na I would run for mayor and Olivarez would run for congressman. He [Joey] kept on convincing me. There was a time also na he brought me to Olivarez and he even asked the support of Olivarez. That was April or May.”

The 38-year-old actor-politician also says that he was uncertain about running at that time because of several reasons.

He says, “I have not yet 100% decided on it. My heart wants to run for the same position [vice-mayor] because, No. 1, first-termer pa lang ako e. No. 2, I’m still enjoying my other career, my showbiz career. For example lang, if I run for a higher position like mayor, which is an executive position, I may not be able to come out live on TV every day.”

Of speculation that Anjo will take legal action against the writer involved in the report, he says: “We’re still studying [the matter]. Kasi as far as I’m concerned, libelous yon. Talagang nakalagay don na I accepted it [P20 million]. They are accusing me of a crime, parang ganun.”

Anjo says he has no idea where the tabloid reporter got the information. Moreover, he says, the reporter did not bother to write down her source for such a “libelous” accusation.

A check with the original Remate column confirms that Julie Bonifacio, except to say “kinumpirma ng aming source,” had nothing to back up her accusation. Bonifacio also said that Anjo has already accepted the vice-mayoralty offer for the 2007 May election, and ended her piece by saying that Anjo has already received “kalahati ng P20 million.”

Anjo is a co-host of the noontime variety show Eat Bulaga!, and one of the stars of the primetime comedy show Nuts Entertainment. Both shows are from GMA-7.

Joey Marquez, in an interview also on October 27, says that Anjo has a “very good chance” of winning in a “two-way race” for mayor of Parañaque.
Continue reading below ↓
Recommended Videos
Read Next
Read More Stories About
Anjo Yllana, Joey Marquez, politics