Katrina pissed off by lesbian issue 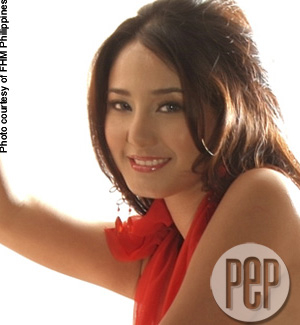 Katrina Halili is set to star in Gigil under Regal Films.
Katrina Halili, star of Regal Entertainment's latest sex comedy Gigil, was not too thrilled by the issues that showbiz reporters were throwing her way during the press conference of Gigil at Imperial Palace last Sunday, Oct. 22.

One in particular that pissed her off was "the lesbian issue."

During the media huddle, Katrina was asked about the controversial "lesbian kiss" that she did with Sandara Park on the set of Super Noypi, another Regal film.

Then a group of writers interviewed her, and the lesbian tag came up again. Tabloid writer Vinia Vivar told Katrina that she saw the video where the sexy star was kissing Sandara in the lips. Apparently, a video was taken of Super Noypi's fun moments on the set.

Irked by the retort, the tabloid writer then walked out of the press conference and cooled her heels outside the glass entrance of Imperial Palace, the venue of the presscon.

Katrina, for her part, ended up in tears.

With the press conference ended, Katrina went to where Vinia was standing and apologized. The writer accepted the young star's apology.

The lesbian issue was not the only one that bugged Katrina during the press conference for Gigil. She was also asked to comment on a report that she fondled Paolo Contis, her co-star in GMA-7's Atlantika. The report said that the actress touched Paolo by moving her hand from his chest all the way down to between his legs.

Katrina was disgusted by the report, and she showed it.

The final issue that Katrina, FHM's Top 2 in the Sexiest Women in the World poll, had to confront was how she was very demanding on the set of Gigil. She was supposed to have rented a room for herself while shooting the sex comedy in Boracay.

According to the rumor, Katrina found the room assigned to her, Say Alonzo, and Bianca King too cramped, and went off to rent her own room.

There was no need to rent another room, says Katrina, because she managed to stay inside the room roughly only two hours. The busy girl just had too many scenes to shoot.