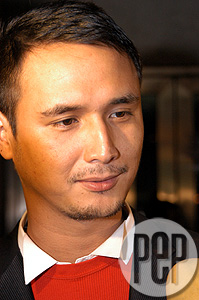 John broke his silence during the PMPC Star Awards for Television at the UP Theater on October 23 in a chat with members of the entertainment press. He said the decision was “mutual.”

When asked if there was a third party involved in their break-up, the actor replied, “Walang third party. Priorities lang at saka yung distance siguro. Alam nyo naman siguro kung gaano ko kamahal yung tao [Vanessa] and I can say that I’ll probably love her for the rest of my life.”

John added that it had been almost five months since he and Vanessa called it quits. He, however, said reconciliation was still possible.

Meanwhile, John was also asked to comment on reports that his ex-wife, Janice de Belen, has married her boyfriend.

John will soon appear in the ABS-CBN remake of Flordeluna, the 1980s TV drama that launched the career of Janice, who played the title role.

Vanessa is now based in Canada. She last appeared on Philippine television early this year as co-host of the defunct ABS-CBN dance show Star Dance.
Continue reading below ↓
Recommended Videos
Read Next
Read More Stories About
John Estrada