Director on 'Kaleldo': It's personal 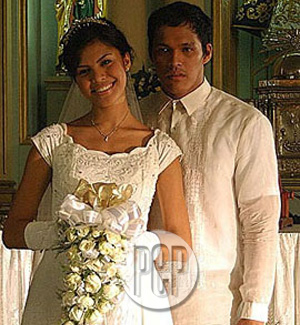 A wedding scene from 'Kaleldo' featuring Juliana Palermo and Lauren Novero.
When Kaleldo held its Philippine premiere last October 30 at Glorietta 4 Cinema 7, Philippine Entertainment Portal (PEP) had a chat with director Brillante Mendoza regarding his second digital film. The movie had its world premiere at the Rome International Film Festival where it was the opening film in the Extra Section from October 13-21.

PEP: How is Kaleldo a follow up to Masahista [your first digital film that won in the 2005 Lucarno Filmfest in Switzerland]?

B.M.: "Eto may lesbian. First of all, when we were casting, yun ang pinaka-difficult sa amin e. yung cast, may chemistry. Dapat mukha silang magkakapatid. At the same time, kung kaya silang bayaran. When we showed them the script, immediately they fell in love with the script. Dun pa lang may plus factor na kami dun."

PEP: How did you convince Ms. Cherry Pie Picache to do a lesbian role?

PEP: Why was the movie not included in the 2005 Metro Manila Film Festival?

B.M.: "Nahihirapan kami sa booking because of the theme. Actors ko, they're not really mainstream actors. We have to seek the help of Viva, ang nagrelease sa amin. Kaya nakakuha kami ng magandang booking. Again, kailangan pa rin naming mag-antay. When the festival director of Rome saw the film in Hong Kong, pinalabas namin ang pelikula sa film market e. It's like a market. You show your film, if they like your film, they'll buy your film. They liked it. Ang requirement niya [Rome], sa amin ang world premiere. Even in your own country, you cannot show it. That's how they do it. If they like your film, they want to earn the world premiere."

PEP: Being a Kapampangan yourself, how close is this movie to you?