Andrea and Junjun, at last! 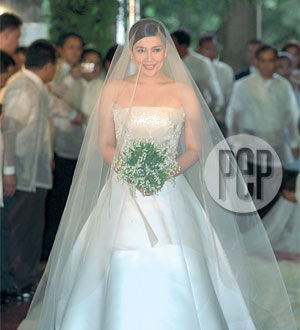 In 1993, Andeng and Junjun were both enrolled in the College of Medicine at De La Salle University in Dasmariñas, Cavite. A mutual friend introduced them to each other. It was love at first sight for Junjun, but not for Andeng.

After doing research on who Andrea was, Junjun gathered up the nerve to woo the bedimpled Caviteña. "Talagang tiniyaga niya ako," says Andeng. "He would send me flowers every week." Six months after the courtship began, he won her heart. Andeng remembers the date well: "That was December 13, 1994."

After three years of medicine proper, Andeng decided she didn't want to be a doctor anymore. Junjun was himself having second thoughts about medicine, but he stayed on—partly because his school was in Cavite, and Cavite was where his girlfriend lived.

That was, more or less, the regular routine of their 10-year romance. You read that right—10 years.

But the going wasn't so smooth all the way. "May bumpy roads din," says Andeng. And then they came to a dead-end street.

"November of 1999, we broke up," Andeng relates. "Nagkaroon ng problema on his side. Parang siya, he wanted to have a good time, but at the same time gusto niya nandiyan pa rin ako sa kanya. Parang—alam mo ‘yon?—push-pull, push-pull, ganyan."

The on-off relationship lasted until 2004. By then, Junjun was already a doctor of medicine, but he had opted for government work, becoming an undersecretary in the Department of Energy and Natural Resources, and then general manager of the Laguna Lake Development Authority. Midway through that year, he proposed marriage.

"That was the first time he proposed to me," Andeng recalls. But she was no longer sure about the relationship, and in July of 2004 she broke up with him. She says she had come to realize why the relationship wasn't working.

She also told her father about Junjun's proposal and their original wedding plans.

"Nang sinabi ng daddy ko na, ‘Anak, you're going to be okay,' confident na ako. Kumbaga, matapang na po ako sa inyong lahat. Kasi feeling ko nga, next to God, my dad is my protector, my dad will not let anyone harm me."

For Junjun, the breakup was a big blow. But he vowed to win her back.

But that ploy didn't work. Junjun then sought the help of Andeng's closest sibling—Bong Revilla, then newly elected senator. But Bong's efforts didn't prove successful either.

By December of 2004, the couple had reconciled. When the New Year came along, Junjun proposed marriage a second time.

But Andeng suddenly developed cold feet and told him: "You know what, why don't you ask me again tomorrow?"

The next day, back at the same church, Andeng finally said yes.

In March, when former Senator Ramon Revilla Sr. celebrated his 78th birthday in his mansion in Imus, Cavite, the couple —with senator Bong Revilla acting as middleman—informed Andeng's father of their new wedding plans.

All that the patriarch said to Junjun was: "Wag mong sasaktan ang anak ko." So be it.