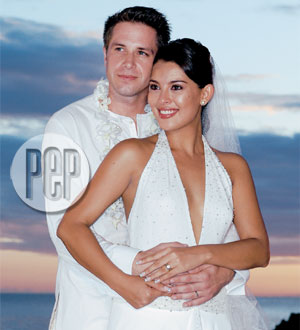 "Our friendship is really what sealed our relationship," Giselle wrote. "We both knew that we were attracted to each other and yet, because we were friends, we tried to deny our brewing emotions for each other." Their beach wedding took place two years ago—February 19, 2005—at the Nami Resort, Boracay Island, Aklan.

Four days before marrying Tim in their Christian-rite beach wedding, G wrote a piece recounting how she found a husband in her friend. Here it is in full:


"Tim and I began our love story early last year. One of the many jobs I had bartending found me in West Los Angeles at a Thai restaurant/bar called Chandra.

"Next door to Chandara was another bar/ supper club called the Arsenal. As fate would have it, Tim was working there as a bartender and bar manager simultaneously. Before his late evening shifts, he would walk into the restaurant and have a seat at the bar and graciously ask me for his regular 'Jameson neat with a soda back.'

"He was always courteous and friendly not only to me but also to the rest of the staff and patrons. After my shift ended at around ten in the evening, it would be my turn to go next door to have an after-work cocktail that would be made especially by him. I was always fascinated by how he dominated his bar area and I even learned a few tricks from watching him work.

"He is a very talented mixologist! We quickly developed a friendship that has surprisingly turned into the most promising and beautiful romance I could ever imagine or dream of!!!


"This habit of him visiting and then dropping by became a routine of sorts. We always had a lot to talk about and got along superbly! At this time, I was also rehearsing for a play called The Days When Cocaine Was King. I had invited him, and one evening he unexpectedly made an appearance to watch my performance. That was the start that sparked an interest that has left me enchanted until now.


"From that day on, we made it a point to spend time together outside work—even just as friends. Our friendship is really what sealed our relationship. We both knew that we were attracted to each other and yet, because we were friends, we tried to deny our brewing emotions for each other.

"Together, the two of us were like children running around an amusement park, with pure abandon. In fact, we did just that on several occasions. We spent a couple of times journeying to Disneyland and Magic Mountain on our days off from work.


"He was never pushy or needy of my time either. He constantly thanked me for the time we spent together. His sweet gestures never went unnoticed. He would always make it a point to drive me to work and pick me up whenever he could. He always had my favorite candies for the offering. (By the way, we both love... love, love... the same kind of candy!) He was a true gentleman all throughout the early stages of our courtship. Never even forgetting to open the car door for me till this day!


"We became constant companions. We enjoyed watching movies and having lunches and dinners together very frequently. I soon fell in love with Tim without realizing it when he started cooking better sinigang than me! It's important what your friends think of the person you're dating, because they see the bigger picture while you're on a cloud filled with infatuation. All of them thought he was a sweetheart and gave me their thumbs-up approval.


"When I had told him of my plans to go back to Manila to visit family and friends, he instantly said he needed a break from the demanding and stressful life he had been living and wanted to come and visit. I was overjoyed, but also a bit worried since I had not explained to him the life I live here in the Philippines and the nature of show business was sure to shock him. He had no prior knowledge of my stature as a celebrity.

"I purposefully did not divulge this part of my life because I wanted him to like me for who I really am, and not be blinded by what I did as a profession.

"He followed just a month after I left Los Angeles. This was in October and he has not left my side since. When we were apart for a month it was pure agony for both of us. We knew then that we don't want to be separated ever again. When he proposed on New Year's Day, I must admit, I was not expecting it. But I am sure he was not expecting to find me so soon either.

"He always tells me that he would find me. It would just take some time... When the right time comes along, your true love will find you... I believe that the Lord Jesus Christ has blessed me with that special someone in Mr. Timothy Michael Lennon Walters, and I rejoice in being able to share with all of you the most unforgettable day of my life."