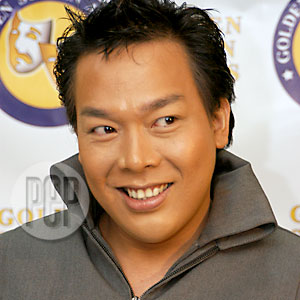 GMA-7's newest talk-show host boldly answered almost all of the 40 questions cooked up by today's hottest radio man, DJ Mo. However, he tapped out on question No.35 which asked which managers were having relationships with their talents.

Sweet tried to resist for a while, but gave up answering in the end. John was egged by Mo Twister to tap out when he answered: "Those na meron before, alam ko wala na e."

He was only five questions away from tying the perfect score notched by Lolit Solis and Borgy Manotoc. The "Forbidden Questions" format keeps the questions rolling every time a guest provides an answer; the questions stop the moment the guest refuses to give an answer.

With the KBP (Kapisanan ng mga Broadcaster ng Pilipinas) now monitoring the radio show, everybody thought that Sweet would play it safe with his answers. However, Sweet put up a good show with his shocking and hilarious answers regarding his personal life—and the lives of other people as well.

The KBP's entry was triggered largely by ABS-CBN's The Buzz inviting the body to look into the fights generated by the show among showbiz personalities. This move by The Buzz was, however, not welcomed by a number of media practitioners who argued, correctly, that the KBP should not be given the power to censor media content.

Worst thing he did when he got drunk—"Dance naked, especially if I drink Tequila. Tequila has some effect on me. Naghuhubad talaga ako, parang init na init ako. Most of my friends, may ebidensiya na nakahubad ako, labas dun 'yung pototoy [male reproductive organ] ko. Reality check for me na lalake pa rin pala talaga ako."

Age whe he got de-virginized—"I was only 10 years old! My mouth was actually devirginized. Classmate of mine...I was in Grade 5. Most of them bagong circumcised, yung mga kaklase ko nagpapakita... Sabi niya, 'Why don't you taste it?'"

The last time he had a male escort—"Last week. How many? Too many to count. Nung tumanda, bumaba sex libido ko. Once a week o three times a month."

Whether he had plastic surgery—"Yes. Fake chin. Liposuction. Lower lip."

John also gave his opinion about various celebrities during the program.

Celebrities who have yet to admit having plastic surgery—"Gwen Garci. Her hips. Her boobs."

GMA-7's worst television show—"Daisy Siete. Parang sinasadya. I think it's intentional na maging campy. [But] There's a crowd for it."

Who should be out of the The Buzz—"Jobert Sucaldito. He's a friend. The Buzz will survive without him."

On who should be out of S-Files—"Pag cost-cutting? Si Paolo [Bediones]. He's not that showbiz. Hindi siya masyadong showbiz but he's a very good host."