Ruffa with Venice and Lorin in California 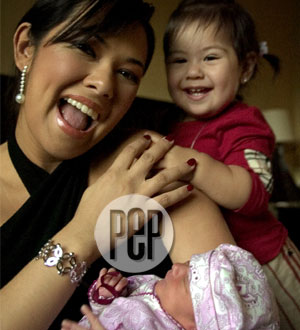 On September 12, 2004, Ruffa texted all her friends announcing the birth of her second daughter Venizia Loran Bektas. She was born at exactly 12:17 p.m. at the Cedars-Sinai Medical Center. The baby weighed 5.3 lbs. and 17 inches.

It seemed that everyone in the Philippines whose cell phone number is listed in the contacts folder of Ruffa Gutierrez-Bektas got this text message on September 12, 2004:

The sender, none other than Ruffa herself, was obviously already up and bubbly after just a few hours of normal child delivery.

Three days later, she sent another text message saying that she and husband Yilmaz had already agreed on a name for their second daughter: Venizia "Venice" Loran Bektas.

One week after the second text message, YES! makes a long distance call to Ruffa in Beverly Hills, California, and she tells us more about her two angels, Lorîn and Venice.

But Ruffa obviously never tires of talking about her little princesses.

At the time of our call, Lorîn is running a slight fever. "Three days na siyang may lagnat." She's teething kasi. Kawawa nga, e. But she sleeps at two in the morning!

As for Venice, she was scheduled for delivery on September 30, but came out unexpectedly three weeks ahead—coincidentally, on the third anniversary of the attack on the Twin Towers in New York!

"They always say that the second baby is always delivered earlier than expected, but mostly, one week or ten days before the due date. Pero ako three weeks early. Naloka ako! Did it have to be at 9/11?"

But all of Ruffa's misgivings about her daughter's date of birth melted away when she saw her baby, pink skinned and brown-haired, looking back at her large brown eyes.

"May nagsasabi, mini Lorin daw. Some say, ako ang kamukha. Others, si Yilmaz daw. I guess we'll all know when she's older. Sa ngayon, she's behaved. All she does is sleep and eat and sleep again."

Venice's dedication (the Islamic ceremony equivalent to the Christian baptism) may happen in Manila by February next year. "Para sabay na sa birthday ng Dad ko," Ruffa explains. Dad Eddie Gutierrez's birthday is on February 6. However, Ruffa is not sure yet if there will be a Bektas family homecoming to the Philippines this Christmas.