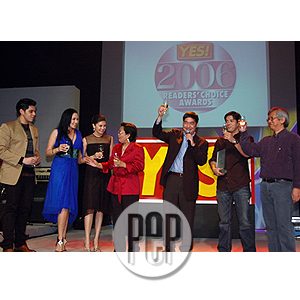 Lance Gokongwei, president of the JG Summit Holdings, led the winners' toast portion of the program. He was joined by YES! Editor in Chief Jo-Ann Maglipon (fourth from left), YES! Executive Editor Pete Lacaba (first from right), and the night's big winners—(from left to right) Raymond Gutierrez, Best Dressed Male Celebrity of the Night; Ruffa Gutierrez-Bektas, recipient of the Bravo Award; Charlene Gonzalez-Muhlach, who was

All roads led to NBC Tent in The Fort, Taguig, for the second thanksgiving party of YES! magazine held on February 28, 2007. Top executives of TV networks ABC 5, ABS-CBN, GMA-7, and of different production outfits, and press people from different publications gather under one roof.

The event also hailed the celebrities who won in the YES! Readers Choice Awards 2006.

Judy Ann Santos, whose schedule was very hectic that day, managed to drop by the party to personally receive her Favorite Actress of the Year award. In her speech, she thanked all the fans for their support. Juday, as she is called by her close friends, bagged the acting award for her performance in Don't Give Up On Us, her movie with Piolo Pascual. Her defunct soap Sa Piling Mo was also heralded as the Favorite TV Show.

Aga Muhlach was chosen as the Favorite Actor of the Year for the movie Dubai. His wife Charlene Gonzalez was cited as the Most Beautiful Celebrity and also the Best Dressed Female of the Night.

Meanwhile, event sponsor Pynocare gave Ruffa Gutierrez-Bektas the Bravo award for the socio-civic projects she undertook to help the Leyte mudslide victims. Together with Aga and Charlene, they received their awards on the main stage—and they joined JG Summit Holdings President and COO Lance Gokongwei, who led the toast for the winners portion, YES! Editor in Chief Jo-Ann Maglipon, and YES! Executive Editor Pete Lacaba.

Other celebrity-winners who were present that night: Erik Santos, whose home was chosen as the Celebrity Home of the Year; Rustom Padilla, who was voted as Scene Stealer of the Year with his tearful confession, "I am gay." on national TV; Diether Ocampo and Kristine Hermosa, who were chosen as public's Favorite Real-Life Sweethearts; Mark Bautista, who was given the Most Fashionable Male Celebrity award.

Fans voted Jason Abalos and Maja Salvador for the Next Big Stars category. Richard Gutierrez's award for Celebrity Condo of the Year was received by his twin brother Raymond Gutierrez, who was chosen as the Best Dressed Male Celebrity of the Night.

In the music scene, Sarah Geronimo was adjudged as the Hitmaker of the Year. Band of the Year title was bagged by Sugarfree, whose song "Makita Kang Muli" also won the Band Song of the Year.


INTRODUCING PEP. Other than celebrating the success of YES! magazine for seven years, the party also marks another milestone for the number one entertainment source.


Summit's Business Unit Group General Manager Lisa Gokongwei-Cheng announced that YES! magazine finally has an online version. In her speech, she said: "Tonight, we are launching what I believe will become another institution in the entertainment industry. I am talking about the Philippine Entertainment Portal or PEP.ph. To those here, who do not know what PEP is—PEP, is a website dedicated to the local entertainment scene. Why are we so excited about it? Because finally, Filipinos from all walks of life and from all over the planet, can access local entertainment news, 24 hours a day, 7 days a week."

Barely three months since PEP launched its beta site, it has already generated 3.5 million page views, according to Google Analytics. And during the party, PEP executed a live web cast for the event.

Both YES! and PEP.ph will work hand in hand to give the Pinoys around the world the best form of entertainment read—the former will take care of your monthly supply of entertainment, while the latter will bring you your daily dosage of showbiz!


REUNION AND RECONCILIATION? Former friends, lovers and foes also met at the party.

Majority of the Bagets stars, a popular movie released in the ‘80s, showed up—Aga Muhlach, William Martinez, Eula Valdes, Yayo Aguila, Cheska Iñigo, and Ramon Christopher. The group currently runs Bagets Foundation, which grants scholarship to deserving college students. There are also plans of doing a remake or a reunion movie for the former teeny-bopper stars.

Smokey Manaloto and Keempee de Leon made it to the party as well. Jeffrey Santos came with his wife Inah.

Lotlot and Monching, one of That's most popular love teams, were both present, but they arrived and left separately. The former couple are currently in the process of annulling their marriage.

Former foes Echo Rosales and John Estrada became friends again! Remember that near-brawl incident which happened just before the premiere night of Superman last June 29, 2006 at IMAX Theater of SM Mall of Asia? The witnesses speculated that Echo's girlfriend Heart Evangelista, who was once linked to John Estrada while they were on the set of ABS-CBN's defunct TV series Hiram, was the cause of the tussle.

As Echo was hopping from one table to another to say hello, onlookers were betting on whether the actor-singer would approach John or not. After a chit-chat with Manay Ethel Ramos, the manager of Aga Muhlach, Heart's boyfriend headed to John's table. The two shook hands, John waved at Heart. A final truce was declared that night.

And, of course, the YES! party was also noted for the encounter of Gretchen Barretto and Dawn Zulueta. Dawn arrived earlier. She and her non-showbiz friends were seated at table number 1, which was located at the right side of the stage.

Dawn was being interviewed by the press when Gretchen Barretto, together with Ruffa Gutierrez and Joyce Jimenez, arrived. Merely a distance of two feet separated the beautiful actresses. La Greta passed by the interview area where Dawn was standing. Gretchen's assigned table was number 3, which was situated at the left side of the stage.

There was a time when Gretchen joined Nadia Montenegro, who's occupying table number 2, which was right beside the table of Dawn, but Gretchen never spared her former friend a glance. Dawn Zulueta, for most part of the night, busily chatted with friends.

In an interview, Gretchen said about their possible reconciliation: "According to my Valentino gown, it's not gonna happen tonight." And it never did.

THE GUESTS. Sharon Cuneta and senatoriable-husband Kiko Pangilinan went to the party. Megastar said she doesn't usually go to parties, but since she loves YES!, she made time for the event.

THE PROGRAM. The event was dominated by the jamming portion. Cookie Chua rendered a heartfelt rendition of "You Don't Know Me." Ali Sotto sang her version of Sting's "Someone to Watch Over Me." Bands Juan Pablo Dream, Boyfriends, at Nanya also kept the atmosphere alive.


The event was truly a testament to how much YES! magazine has touched the lives of not just the readers, but of the showbiz newsmakers as well. It was indeed a night overflowing with fun, food, and friendships!