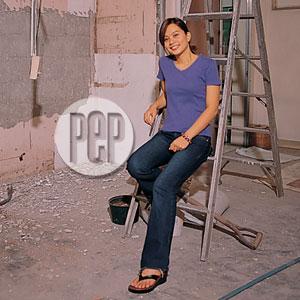 Kitchie explains her vision for her bedroom: "I want it parang library style... kasi ayokong masayang. Parang naisip ko na this would last." She'd like to have the room surrounded with books, from floor to ceiling. Her mom adds that they're not hiring an interior designer because Kitchie has her own ideas for the room: "She does things herself, e."

Refreshed, the singer-songwriter reentered the entertainment industry in 2004—with a great big bang. Within months, her hit single "'Wag Na 'Wag Mong Sasabihin," from her self-titled album, Kitchie Nadal, was a chartbuster.

Kitchie admits she had high hopes for the album.

"I knew na it will go somewhere. I'm also open kung hindi mangyari 'yon. Kasi when I did the album, parang medyo mini-meditate-an ko... I expected hard work, 'yon lang. And then 'yong vision na it's gonna hit the charts. Kasi alam mo 'yong saying na ‘People with no vision, cast off restraint'? It's something biblical. You have to have a vision, otherwise don't do it na... It's more of meditating and praying na ‘God, this is what I want to happen.'"

Kitchie is now a part of the Victory Christian Fellowship congregation. She is still taking up education and psychology at De La Salle University. And of course she's swamped with gigs.

Still, Kitchie found time for a new project—renovating her late grandfather's former study and turning it into her own bedroom.

The fourth of five siblings, Kitchie lives with her family in her maternal grandparents' two-storey Makati home. "This is an old house, 50 years old na," says Kitchie's mom, Marjorie Nadal.

Mom explains why the family decided to give Kitchie the spare room: "As much as possible, when Kitchie's at home, she wants to sleep, she wants it quiet... para she can write. And during her free time, she really wants to be home... She's very attached sa amin."

Today, whether Kitchie likes it or not, she is a celebrity. "Ngayon, I have to be careful where I'm going," she admits. "Dati, parang I don't care where I go."

But she's more ready now to make it big: "I have to have that vision, e. It's something God wants. He wants us to have a vision."