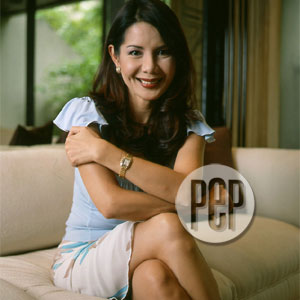 Carmi Martin was only 15 years old when she was introduced in the movie Dolphy's Angels, a take-off on the famous 1970s U.S. television show "Charlie's Angels," which has now been made twice into a movie.

Twenty-eight years later, Carmi Martin is still a welcome presence in the movie and TV industry.

Although not as active in her acting career before, Carmi isn't complaining. She feels she has already come full circle as far as showbiz is concerned. "Napagdaanan ko naman lahat," she says.

And who's to argue?

In films, she has been handled by the best, including two National Artists for film—Ishmael Bernal in Working Girls (which, incidentally, is her all-time favorite of all the movies she has done) and Lino Brocka in six films, including Hot Property and Bayan Ko: Kapit sa Patalim.

"Hindi sa pagyayabang, napagdaanan ko na rin ‘yang mga filmfest abroad," says Carmi, who was with Brocka and Gina Alajar in Cannes when Bayan Ko was shown in competition, and with Brocka in Nantes, France, for the screening of Cain at Abel.

Carmi was an even bigger success on television, riding high in the medium for three decades, each time giving her audience a fresh view of varied talents. In the ‘70s, she was at her comic best in the top-rating sitcom "Chicks to Chicks," which ran for 14 years. The ‘80s showcased her dramatic abilities via her own drama anthology, "Carmi." The ‘90s turned her into a TV variety-show host "Tonight with Dick and Carmi," with Roderick Paulate.

Carmi considers her "Dick and Carmi" days the summit of her career.

And there's no stopping Carmi. In the last six years, she has introduced a new facet of herself to her audience, making a mark as a no-nonsense kontrabida in such telenovelas as GMA-7's "Ikaw Lang ang Mamahalin," "Kahit Kailan," and "I Luv NY."

Ironically, this new facet is in total contrast to Carmi's true self. Unknown to many, Carmi is a kontrabida with a big heart. For 13 years now, she has been an active member of the Philippine Band of Mercy, a non-government organization that offers services and operations for indigent disfigured and disabled children, such a cleft-lipped and the clubfooted.

"I like children," she says of her off-camera vocation. "I like helping people as much a I can. It's not naman, you know, help them through money or something, but with the things that I can do."

Her life seems to be working out perfectly, the way she designed it, with a fruitful 28-year showbiz career, well-invested earnings, and free time spent in charitable work. As if all this isn't enough, Carmi now makes a career out her current passion—interior design.

The only missing piece in her grand design, it seems—besides an acting award, which she still dream of getting—is a permanent partner to share all her glories with. But the lady shows no indication that she's about to leave her state of single-blessedness.