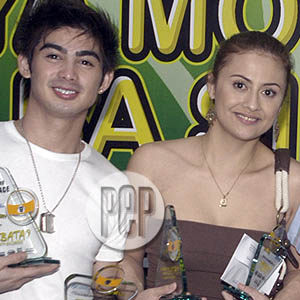 Jaycee Parker admitted for the first time that she broke up with her boyfriend Danilo Barrios three days ago. Her revelation happened during her guesting on DJ Mo Twister's radio program.

Jaycee Parker admitted for the first time that her relationship with Streetboys member and young actor Danilo Barrios is already over. She made the announcement in DJ Mo Twister's radio program, Good Times, where the Viva Hot Babe was put on the hot seat for the "Forbidden Questions" segment.

The 21-year-old sexy actress said she broke up with Danilo three days ago. Jaycee, however, denied the involvement of a third party. She said that their relationship just didn't work out.

Jaycee was able to answer only 27 out of 40 "Forbidden Questions" of DJ Mo. Despite that, the Viva Hot Babe was still able to give juicy answers to DJ tough Mo's tough questions.

During the show, Jaycee mentioned Aiza Marquez a couple of times.

First, Jaycee revealed that she had messed around with the boyfriend of her friend. When asked if her friend is a celebrity, she honestly said, "Yes," and gave Aiza's name as the friend she was referring to.

It could be remembered that Danilo and Aiza were a couple even before Danilo was linked to Jaycee. The sexy actress explained that when that happened, "They [Danilo and Aiza] were still together." However, she clarified, "but that was a long time ago, bad girl pa ako before, e."

Another question that made Jaycee answer Aiza's name was "Bad encounter with a celebrity." According to Jayce, "Three years ago, I had an encounter with Aiza and her aunt regarding Dan [Danilo] and my mother." The said encounter was even picked up by some showbiz talk shows.

THE GUYS JAYCEE SLEPT WITH

Aside from Danilo, whom she admitted having personal sex tapes with, Jaycee also revealed that she had already slept with four other male celebrities.

When asked if she has been offered an indecent proposal, the Viva Hot Babe immediately answered, "Yes." She said she actually received two offers: a house-and lot from a mayor and a car from a businessman.

Meanwhile, here are Jaycee's other answers to the "Forbidden Questions":

Which Viva Hot Babes did you like the least? "Gwen [Garci]. We had an argument before na hindi nagka-ayos, pero okay na naman, e. I used to live in a condo with her, tatlo kami nila Katya [Santos], it was just about the room."

Who is your girl crush? "Dalawa. Katya and Maui [Taylor]. Si Katya, 'di ba, I used to live with her? I used to sleep on her [chest]." However, Jaycee said that nothing happened between them. She said, "She was pushing away."

How many "one night stand" have you had? "Three."

What part of your body is not real? "None. I'm not kidding. You can search me if you want. It's all real."

and for Maui Taylor: 'crushngbayan@yahoo.com.'

Jaycee tapped out in the question "If you can say the following line to a local celebrity, ‘Dude, we all know you're gay, so just admit it,' who is it?" Jaycee defended, "Because I don't know anyone. I cannot be sure if they are gay or not, 'di ba?"

She added, "One thing, it's not right for me to say it, and I don't have the proof. I haven't seen anything so I can't."