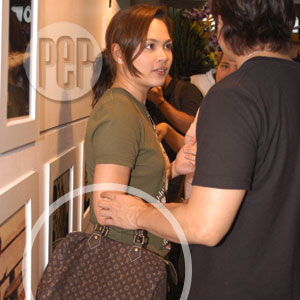 Judy Ann Santos goes au natural with her no frills look at the photo exhibit of Ryan Agoncillo, her boyfriend. Juday pairs her regular tee and jeans with a Louis Vuitton Mini-Lin Speedy.

Two French and one Italian—Chanel, Louis Vuitton, and Gucci. That's what local celebrities are lugging nowadays.

Many would call it frivolous and extravagant to have such things. Many also do not know that the three European designers pioneered and inspired what is considered practical attire today.

Coco. Gabrielle Chanel, or Coco as she would like to be called, revolutionized fashion in the 1930's, introducing trousers to women's wear. Coco also was the first to use jersey, a kind of cloth used for men's underwear, as fabric for her dresses.

"Luxury is when the inside is as beautiful as the outside," she would always say.

Coco was also the first designer to put her name on the label of her perfume. Decades after its first bottle was sold, the fragrance is still available today—the Chanel No. 5.

Coco will forever be known as the lady in tweed.

Today, artistic director Karl Lagerfeld is in charge of anything that walks on the Chanel runway.

Louis Vuitton was a known luggage-maker in Paris. His clientele includes the royal families and the moneyed.

In a time where big trunks held clothes and personal effects, Louis popularized the Steamer Bag, and eventually the Keepall. Some say he gave birth to the concept of overnight bags.

2003 marked the brand's boldest move in keeping up with the times. LV's artistic director Marc Jacobs collaborated with Japanese artist Takashi Murakami in changing the traditional monogram, making it colorful and fun.

He became popular to the upper class when he made equestrian inspired luggage. The brand's green-red-green straps were taken from the style of saddle girths.

Locally, some celebrities are proud to be fans of the three designers. Click on more photos to view the stars getting branded.