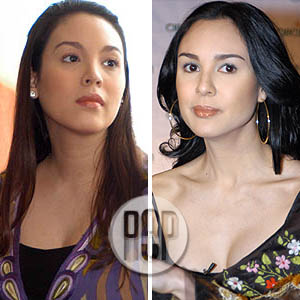 "Hindi ko alam," replies Claudine Barretto when asked if her sister Gretchen will pay her a visit when she gives birth.

Claudine is six months pregnant with her first child with husband Raymart Santiago. The couple found out about the baby on the way in November.

Claudine says she still hasn't received any word from Gretchen.

When asked if she has plans of getting Gretchen as one of the baby's godmothers, she simply shrugs.

Gretchen and her family, the Barrettos, have been feuding since 2004.

Talk has it that the falling out started when ABC-5, owned by Gretchen's partner Tonyboy Cojuangco, hired Willie Revillame to host the show Puso o Pera?. It was said that Dennis Padilla, Willie's former co-host in Masayang Tanghali Bayan and husband of Marjorie, had a heated conversation with Gretchen.

Dennis allegedly questioned why the station hired Willie. Dennis, reports said, blamed Willie for the cancellation of MTB, which left him out of job.

The argument between Gretchen and Dennis was said to have resulted to Dennis—Marjorie and kids in tow—moving out of the Loyola Grand Villas house, which Gretchen supposedly owned.

Up to now, it is still unclear whether Dennis and his family were kicked out of the house or they chose to leave the house.

The Barrettos, even when reportedly feuding, didn't make the issue a public spectacle. All was kept within the family.