Vilma-Boyet love team: From movies to the political arena? 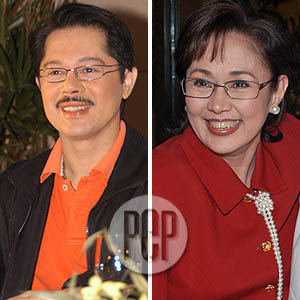 The tandem of Vilma Santos and Christopher de Leon is one of the country's most durable loveteams. With both of them running for the two highest positions in the province of Batangas—Vi for governor and Boyet for vice-governor— on the May 14 elections, there is a possibility that their pairing might transcend from the silver screen to the political arena.


From the big screen to the political arena? This might as well be the scenario for one of the country's most durable love teams—Vilma Santos and Christopher de Leon.

The Vi-Boyet tandem is arguably one of the best dramatic pairs Philippine cinema has ever produced. Vilma and Boyet's first movie together is the classic Tag-Ulan sa Tag-Araw in 1975, directed by Celso Ad. Castillo, where they played cousins who fell in love.

Now, after three years, a Vi-Boyet reunion is in the offing. Not on the silver screen though, but in the province of Batangas.

Vilma, also known as the Star for All Seasons, is in her third and final term as mayor of Lipa City. Now, she is running for governor of Batangas, one of the most productive provinces in the country. She filed her certificate of candidacy last Wednesday, March 28, at the Batangas Capitol.

Drama King Boyet, on the other hand, has filed his candidacy last night, March 29 (the last day of filing of candidacy) for vice-governor, also of Batangas.

However, the Star for All Seasons and the Drama King are not running mates.

Vilma is running under the ruling coalition party, Lakas-CMD, with Edwin Ermita as her running mate. Edwin is the son of Executive Secretary Eduardo Ermita.

Boyet, meanwhile, is running under Genuine Opposition (GO), the coalition of the opposition. In an interview with 24 Oras a few minutes after he filed his candidacy for vice-governor, the multi-awarded actor said that he has no running mate as yet.

Although they belong to different political parties, the possibility that Vilma and Boyet might end up winning in their respective positions cannot be easily dismissed. And should this be the case after the May 17 elections, then this may be deemed as a grand reunion of the Star for All Seasons and the Drama King, this time though, it's not on the big screen but in the political arena.