Rosanna and her "foes" 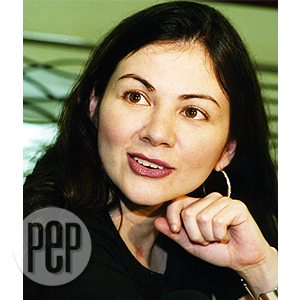 Through her entire career—it can be said that Rosanna Roces, who is a very outspoken actress, has already figured in a lot of controversies. She has, in fact, made a lot of foes in showbiz: Lolit Solis, Vicki Belo, Lani Mercado, Lorna Tolentino, among others.

Sexy actress Rosanna Roces, or Osang to her close friends, is known in showbiz for her bluntness—whatever she thinks, she says aloud, with millions of Pinoy viewers hearing her.

But not all her frank statements have been well-received. For a couple of times, she got into trouble and figured in a tiff because of some comment she made.

PEP (Philippine Entertainment Portal) recalls the issues and people that put the spotlight of controversies on Osang.

Suspensions. Before Rosanna decided to lie-low on her career, she had her share of suspensions. She was also repeatedly sanctioned by different TV censorship committees.

Remember that in 2003, according to newspaper reports, Kapisanan ng mga Brodkaster ng Pilipinas (KBP) issued a suspension order against Rosanna for her vulgarity during her interview with Paolo Fabregas in Startalk, which was aired in October 9, 1999.

Other broadsheets, however, reported that she was just fined P10,000 by KBP for violating the provisions of the General Standards of the Television Code on the use of obscene dialogues and actions.

Another suspension notice was served to Osang by GMA-7—it was for a statement she issued about Rico Yan's death. Although it was declared that Rico died from "acute hemorraghic pancreatitis" or bangungot, the actress still claimed on air that the young actor died of drug overdose, and that his friend Dominic Ochoa was also into it.

Her allegations drew violent reactions from Rico's die-hard fans, they even threatened to boycott Startalk that time. She was suspended by the GMA-7 management for one month.

Dr. Vicki Belo. She and Osang used to be close friends and business partners. In fact, Osang is the first celebrity-endorser of Dra. Vicki.

But one day, she went on national TV and showed the bulges in her midriff and back. According to the actress, this was caused by the doctor's botched liposuction procedure. She went as far as saying that Dr. Vicki is a fake doctor.

Is this the only reason for their broken friendship? The answer is, "No." It started when Osang allegedly violated the contract she signed with Belo's company, Forever Flawless, where she was the main endorser.

As a result, Viva Hot Babe Katya Santos and actress Lorna Tolentino, who later on replaced the sexy actress in Startalk, became the brand's image model. Osang tried to get even by not acknowledging Forever Flawless on air, which she was supposed to do as part of the ex-deal agreement with Dra. Vicki.

Enter Lorna Tolentino. The actress-TV host Lorna Tolentino has taken over two of Rosanna's jobs—as the endorser of Forever Flawless and host of Startalk.

This made Osang really upset that she was quoted saying something like, "Lorna may have taken over my two jobs, but I got her husband [Rudy Fernandez]. It could be remembered that Rosanna did a sitcom with Rudy in GMA-7, Da Boy and Da Girl.

Despite the claims of Rosanna on national television, Lorna kept her silence and let Osang do all the talking. The statement that Lorna issued at that time was that her marriage with Daboy—Rudy's popular name in showbiz—is very solid.

Manay Lolit, Osang's former manager. In an article with PEP , the prominent talent manager said that she is ready to forgive Rosanna, her former talent and co-host in Startalk.

Osang left Startalk in 2004 because Lolit allegedly squealed the pregnancy of her daughter Grace Adriano to Dra. Belo. Their word war then was so intense.

In 2006, the year that Startalk celebrated it's 11th anniversary, Osang granted the show an interview. She said that she has forgiven Lolit. "Kahit may sabihin pa siya [Lolit], wala na siyang maririnig sa akin. Kahit papaano, may pinagsamahan din kami," she added.

Fight of the two lolas . Then came the feud between Rosanna and Lani Mercado over their grandson Jose Gabriel.

Jolo's a woman beater, the Revillas are not sending baby Gab enough financial support, Brian is a drug user, Bong has a mistress—all these were Osang's allegations. Osang prohibited Jolo from seeing his own child. Lani planned resorting to legal means.

Rosanna, on the other hand, does not seem to be ready yet for any reconciliation with Lani. The two women are cordial with each other.

Back in Tito Molina's arms. This is what Rosanna wants to happen. Osang even said in The Buzz last March 25 that she would never enter into another relationship unless it were with Tito Molina.

In 2005, however, Rosanna was singing a different tune. She called Tito a "drug user" and "irresponsible." The two were together for 11 years.

So what's up with Osang Now?

She's happy laying a doting lola to Budoy, the son of Jolo and Grace. But with regard to the rows she had with different people, there has not been any real closure. When is she going to be willing to kiss and make up with her so-called foes? Only time will tell.