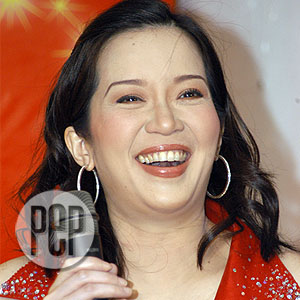 The TV host-actress is pregnant with her second child—her first with husband James Yap. She has a son, Joshua, fathered by Phillip Salvador.

GOOD NEWS. A month ago, Kris decided to temporarily leave show business until she gives birth to Baby James. She reasoned that the issues surrounding her marriage is affecting her pregnancy.

Hope Centeno, a former employee of Belo Medical Group, admitted on national television that she allegedly had an affair with James.

Since the controversy began, Kris was rushed to the hospital twice because of "premature labor pains," endangering her health and that of the baby. She was also diagnosed with gestational diabetes, a type of diabetes that occurs only during pregnancy, according to mayoclinic.com . The doctors also told her that the baby is underweight, weighing barely 3 lbs.

Kris, now on her eighth month of pregnancy, visited her doctor at the Makati Medical Center last Friday, March 30. She had several tests done, checking up on how the baby is doing.

Baby James weighed 4 lbs. and was said to be doing well. Kris was still advised to have a complete bed rest and to stay away from sweets.

Kris is due to give birth on May 6.
Read Next
Read More Stories About
Kris Aquino, James Yap
Post a Comment
Featured
Latest Stories
Trending in Summit Media Network