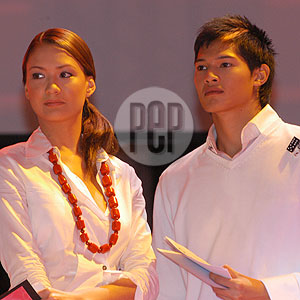 Model-TV host Borgy Manotoc (in photo, with girlfriend Ornusa Cadness) is again involved in a bar fight, this time with the nephew of former DSWD Secretary Mita Pardo de Tavera.


Commercial model and TV host Borgy Manotoc got involved in a bar fight just two months after his confrontation with a former basketball player.

Carlo, whose head was bandaged, talked to reporters while he was at the Makati Medical Center. According to him, he was merely asking for the time from a woman he did not know. It turned out that the woman was Borgy's girlfriend, model Ornusa Cadness.

Carlo said that Borgy warned him not to talk to his girlfriend. The two men later argued, which reportedly ended with Carlo and his friends being beaten up by Borgy and four others.

In an interview with 24 Oras, Carlo narrated, "I confronted Borgy and we had an exchange of words. I'm not sure exactly what, and someone hit me over the head, and I tried to fight back. I could hear them attacking my friend. He and several other guys were there and he [Borgy] punched me in the face once."

Parents of Carlo said they are considering filing charges against Borgy, who has yet to be reached by the Taguig police.

Carlo's mother, Mara, said in an interview, "I stand here as a mother who is angry, but still wants peace, but wants another son to learn a lesson."

It will be remembered that early February this year, also at the Embassy Bar, Borgy had a near-fight with former professional basketball player Bong Alvarez when the latter mistook his girlfriend for a waitress.

It was also at the same Taguig bar where the grandson of the late dictator Ferdinand Marcos had a fight with R&B Prince Jay-R, again after the latter talked to Ornusa.