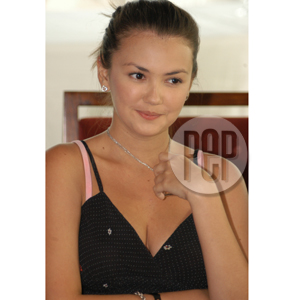 Although Angelica Panganiban refused to name her companion at the remote and romantic spot of Amanpulo, she could not hide her glee at the mention of Derek Ramsey's name. She self-consciously asks, "Bagay ba kami?" "Oo," someone answers. "Thank you," she smiles.

A hint of a tan and a huge smile are only a few of the souvenirs Angelica Panganiban has brought home from her Amanpulo adventure.

Located in Pamalican Island, Palawan, Amanpulo (which means "peaceful island," and opened in 1993) is set on its own private island surrounded by white-sand beaches and seven kilometers of coral reefs. It was Angelica who suggested that they go to this island getaway. She said so many friends had told her that the place was beautiful.

She told PEP (Philippine Entertainment Portal) during the press conference of Rounin yesterday, April 10, that she went to Amanpulo also to do some soul-searching.

To top it all off, the mystery guy who accompanied her to Amanpulo shouldered all the expenses. Amanpulo, incidentally, is one of the most expensive places to go to; in fact, unless times have changed, it charges in dollars. When asked if she spent her own money during the trip, the young star exclaimed, "Hindi ‘no!"

ON DEREK. Talk turns to the model-turned actor, Derek Ramsay, who has been linked to her recently. She describes their relationship now as "friends," contrary to an earlier report where she said that they were more than friends.

During the press conference at the 9501 Restaurant in the ABS-CBN compound, the young star of Rounin reveals that Derek is nine years her senior. "Hunk naman siya, e. Siya ang pinaka-sexy na lalaking nakilala ko," she declares. She chose Derek's arms and abs as her favorite among his body parts.

Angelica plays the role of Aura in the ABS-CBN tele-epiko Rounin. As Aura, she is caught in a love triangle between Juris (Luis Manzano) and Creon (Rafael Rosell).