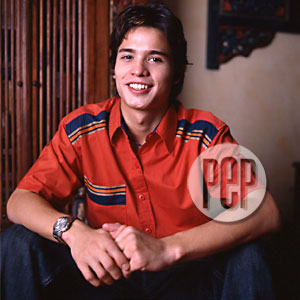 When asked if he's aware that his father is a well-known and respected human rights lawyer, Cogie grins and says: "Oo... dati." He doesn't explain his answer, but goes on to the share this tidbit: his father is supposed to be a little uncomfortable about being less famous now than his son. "Minsan, naiingit siya sa akin. Kasi, di ba, dati ganito: ‘Anak ‘yan ni Attorney Domingo.' Ngayon, "Yan ang daddy ni Cogie Domingo. &am

Cogie Domingo, 22, spent his growing-up years in Ayala Alabang Village, in Muntinlupa. "Kaya nandoon ang kanyang childhood memories," says his mother Zen Fernandez. "That's where he was born, ‘yon ang kanyang ancestral beginnings, home, and everything sa kanya." To this day, that's where Cogie feels most at home. When his schedule permits, he makes it a point to give his Ayala Alabang friends a visit.

The family once transferred to this condominium unit in Makati seven years ago. When Cogie was already starting a career in show business. But even before that, the family was already considering relocation—primarily because of Cogie.

"Ang office namin noon, nandito sa Makati," explains the mother. "Ginagawa pa noon ‘yong mga skyway. And it was like, in one day we spent three hours coming to Makati, another three hours going back home. And Cogie, who was just then a kid growing up, parati kaming hinihintay.

"Sometimes, he would even call me in the office, ‘What time are you coming home. And then when I say, about this time, after about 20-30 minutes he's gonna call us again, ‘Where are you now' Are you now in Magallanes? In Sucat? In Alabang exit? In Filinvest?' You know, parang blow-by-blow account, just to make sure that we're really on our way home? And I was feeling so guilty kasi darating ako, he's lying down on our bed waiting for us. I feel so bad for him.

"So, I said, I guess we would have to find a place here na convenient for everyone and also for him, because he was already doing showbiz activities, like he had some TV programs before. Doon siya nag-umpisa."

Sadly, it was also about that time that Cogie's parents separated. Zen Fernandez left for the United States to seek better financial opportunities, leaving the condo to Cogie and her two sons by an earlier marriage that ended in divorce. Although Cogie is close to his older stepbrothers, a pairs of twin, the six-year gap between them often left Cogie to his own devices. He lived near—but not exactly—with his father, human-rights lawyer Rod Domingo. "Same building, dito rin sa Makati," says Cogie. "Pero sa iba siya nakatira."

Meanwhile, his mother's move to the States turned out to be, not only profitable, but also family-friendly. Mother and son combined resources—Mommy Zen's from her savings, Cogie's from showbiz—to put up a new business in California, an overseas employment agency called Auxiliary Services for Medical Center Inc.


The direct-hiring company has been doing fine. So fine that Cogie has been able to acquire a house-and-lot in Lancaster, California, U.S.A. At the time this article was published, he's considering to buy a farmland in Batangas.

Cogie's one lucky guy. He has his showbiz career and a loving family. And even if the former would prove to be a bit more turbulent for him, the latter would calm things for Cogie.