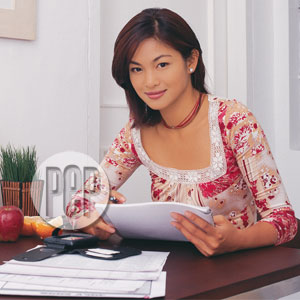 "I think I have the ability to make my interviewee comfortable with me because I'm open and sincere. A lot of my interviewees have said that about me. That's why, given a chance, I want to have my own talk show."—Miriam, an Oprah-Winfrey fanatic. To date, Miriam co-anchors "Palaban" with Winnie Monsod and Malou Mangahas, and "Pinoy Meets World" with Paolo Bediones.

YES! magazine had this interview with former beauty queen Miriam Quiambao after she won the 1999 Miss Universe First Runner Up title, and before his marriage—then eventually, separation—to Italian businessman Claudio Rondinelli.

Sitting on her most used chair in her dining area, Miriam Redito Quiambao—whose disastrous fumble on an international stage ended up showcasing her sophisticated aplomb instead—tells the tale of her life with much verve and some satisfaction.

It was GMA 7 which offered her a part in the program opener "Mornings @ GMA," since renamed "Unang Hirit." Then when broadcaster Karen Davila left the network, Miriam replaced her as Paolo Bediones'sco-host of the defunct reality show "Extra Challenge." Somewhere in there, she also enjoyed an acting stint in a few episodes of the Bong Revilla's sitcom "Idol Ko Si Kap," which is now the "Hokus Pokus."

"The two daily shows I'm involved with are in the news-and-public-affairs department. In a way, I'm one of the few celebrities who have crossed over from news and public affairs to showbiz," says the 5'7" morena beauty.

"I like news and public affairs better because it means I have a wider range of market," she observes. "Kasi there are people naman from the AB market who are not too keen on mga showbiz personalities. They're more into mga intelligent shows, conversations. And because I host two news-and-public-affairs shows, I cater to that market."

Am likes to think that her TV job, which has her meeting and interviewing and reporting on all kinds of people has contributed a great deal to her "being the better person I am today."

"You know, I never spoke this articulately before," she reveals. "When I was in high school, I had major, major stage fright. And it was so bad. If I knew the answers and wanted to recite, I'll try to raise my hands tapos nanginginig na ako, pinapawisan na ako nang malamig. My nail beds will turn blue. And as soon as I finish my recitation, I'll slump back down onto my seat and cry."

At the Bb. Pilipinas pageant, as much as at the Miss Universe contest, she says she carried that same stage fright.

"That's why I think I don't deserve yet the Miss Universe title because I still had some issues," she says. "So I settled for the First Runner-Up title. But if prior to the pageant, I had already resolved all my issues, I have a strong feeling that I was gonna win, except that I wasn't confident enough at that time."

Today, she is practically a different woman.

"I am at a stage wherein I've finally come to discover my abilities and feel confident about my own person. And so I know na whatever problems, whatever obstacles that come my way, I know somehow I'm going to overcome that."

In April 15, 2002, Am moved to her condominium unit just blocks away from her mother studio GMA 7. This became her home until she married Claudio in Boracay two years after. And from 2004 to 2006, Miriam resided in Hong Kong.