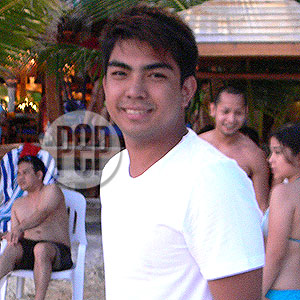 PEP caught up with young dad Jolo Revilla, playing with his younger siblings Ram and Loudette. Jolo played tag with Ram after this picture was taken.

PEP (Philippine Entertainment Portal) followed the stars all the way to Boracay for the Holy Week break. Here are some PEP exclusive stories:

Homeboy Boy Abunda was very at home on the island. The premiere host was with his partner Bong Quintana and his right-hand Bettina Aspillaga of Backroom Inc.—Boy's artist management company. Boy and Bong stayed at the Cocomangas Beach Resort.

Boy is a hardworking boy, too. We've seen him on his cell phone several times, looking very much like the busy bee that he is.

Gwen Garci was sizzling hot in Boracay. Adoring male fans mobbed her, asking to have a picture with her. The sexy star happily obliged.

Gwen's ex-boyfriend, Andrew Wolfe, was also on the island with a new girl.

"Wala akong pakialam," said Gwen, short and sweet. She also added that she and Andrew are still not in good terms after their breakup brawl.

Speaking of Andrew Wolfe, Andrew had a slight misfortune during his vacation. The model-turned-actor lost his bag!

On the upside, Andrew and ex-girlfriend Keanna Reeves bumped into each other on the island. The two were civil. Keanna even introduced her new boyfriend, French model Sofian, to Andrew.

We asked Jolo where his son, Gab, was.

Jolo said he didn't push to bring his son with him to Boracay. He explained, "Siyempre gusto rin siya makasama ng mom niya."

Grace is currently finishing high school in Baguio. Osang takes care of Gab while Grace is away.

Singer Jed Madela was seen partying at Cocomangas Bar for two straight nights. The world champion singer was drinking a bluish beverage—possibly the bar's famous Illusion Shaker—and was accompanied by a male friend.

PEP hobnobbed with Bianca King while she was buying hotdogs near D' Mall. The Boracay patron excused herself from having her picture taken. She said she had just arrived on the island and was looking for a quiet retreat from work.

PEP asked Bianca what her plans are while in Boracay.

Bianca had a massage at the Nivea booth the following day—a treat for herself indeed.