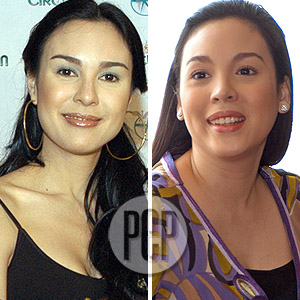 Gretchen on the three-year feud, "I shall put behind me the past." Claudine on the chance meeting with her Ate Gretchen, "It was a very, very good meeting." Dennis to Gretchen, "I am sorry." Marjorie has yet to issue her statement.

Recently, the much-awaited reconciliation between two of the Barretto sisters, Gretchen and Claudine, took place. It was indeed a welcome news! Many people were happy for them. Some found it apt and timely given that the younger sister is currently on her sixth month pregnancy.

During the press conference of Walang Kapalit last April 10, Claudine asked the press to leave the details of the reconciliation to them. She also said that she hardly remembers the cause of their almost-three-year gap.


The cause? The first smoke of this feud among the Barretto sisters came out in Joe Barrameda's column in Abante Tonite, according to the article published in the July 2004 issue of YES! magazine. Tabloid reporters soon picked up the story.

Write-ups mentioned that the comedian and former Caloocan councilor Dennis Padilla had an exchange of words with his wife Marjorie Barretto's elder sister, Gretchen.

The alleged cause of the argument was about ABC-5 hiring Willie Revillame as host for its noontime show Pera o Puso. Tony Boy Cojuangco, Gretchen's partner, owns ABC-5. On the other hand, Willie was then a co-host of Dennis in Magandang Tanghali Bayan (MTB).

Dennis reportedly blamed Willie for losing his hosting job in MTB. It will be remembered that Willie was forced to resign from MTB and leave the ABS-CBN family altogether because he always got into trouble with Movie and Television Review and Classification Board (MTRCB) for his offensive jokes.

Willie soon found a new job with ABC-5, while MTB has gone a series of reformatting until Dennis and other co-hosts found themselves out of work.

And Gretchen, provoked by the heated exchange and insulted by her bayaw's tone, reportedly shot back: "Lumayas kayo sa bahay ko."

YES! magazine tried to double check the information by calling Barrameda, and he confirmed the details. However, a reliable source said that reports were probably false, as Gretchen was not the sort who would throw blood relations out in the streets.

False history? In the press conference of Walang Kapalit yesterday, April 12, Dennis cleared that Willie was never the cause of the gap between him and Gretchen.

Dennis clarified, "Never, no [it wasn't about him]. That was misconstrued. Willie was never a part, because Willie remained a friend through the years. Hindi siya part. ‘Yong naisulat lang twisted. Ang problema lang doon lumaki kasi Marjorie and I, we, never spoke about it."

How Claudine got into the picture. The family feud became a public item after other members of the family took sides in the fight.

Claudine defended her brother-in-law Dennis and sister Marjorie on national TV, and talking ill about her sister Gretchen. Inday Barretto, their mother, also appeared in a showbiz talk show chastising her eledest daughter.

Tonyboy, apparently, got very upset that he had his lawyers draw up papers asking Marjorie and Dennis to leave the Loyola Grand Villas house that Gretchen had given them to use. Since then, the family feud escalated.

In August 2005, the public thought that things would go for the better, that Claudine and her sister would finally iron out their differences. The youngest of the Barretto sister hinted that she and Gretchen already patched things up via phone in January 2005.

Gretchen, through her lawyer, said: "Claudine had assured Ms. Barretto that her contrition was genuine and would be accompanied by a public retraction and or clarification of the damaging and hurtful statements she had issued. This has not been done. Under those circumstances, Claudine's announcement that everything between her and Ms. Barretto is ‘okay' is a puzzling assertion, even as it is obviously incorrect."

Gretchen was not in attendance during her youngest sister's wedding in March 2006.

The emotional meeting. The famous sisters avoided each other until Gretchen and Claudine bumped into each other last April 4, a Holy Wednesday.

The reconciliation—which was announced publicly last Tuesday, April 10—took place at S&R Supermarket in Taguig. Claudine dropped by the said supermarket to buy snacks for her daughter Sabina, while Gretchen was there to buy also some stuff for her family's Holy Week trip.

It was a perfect timing indeed. In an article put out by PEP last March 29—just one week before the short but emotional meeting—Claudine said in an interview that she was really hoping that the feud would end soon.

And her wish was granted? Yes, but not completely.


Marjorie and Gretchen reconcialiation. Now that the eldest and the youngest of the Barretto Sisters have finally made peace, many people are looking forward to the reconciliation of Gretchen and Marjorie.

In an interview with Dennis yesterday, April 13, at Walang Kapalit's press conference, he mentioned that Marjorie has no idea about what happened between Gretchen and Claudine. He was also clueless about it.

Gretchen, despite the fact that she was left alone during the rise of the said feud, seemed to have buried the hatchet. In fact, when Gretchen was asked by PEP to say something about the reconciliation, her text message was: "Yes, it's true that all is well. Claud will always be my baby sister, thru the not so good and good times. I will remember only her good and loving ways. I shall put behind me the past. That goes for Marjorie as well. Life's too short to put to waste."

Is the three year-gap of three Barretto sisters going to end soon? Let's wait and see.