Heart and Jericho to get married three to five years from now? 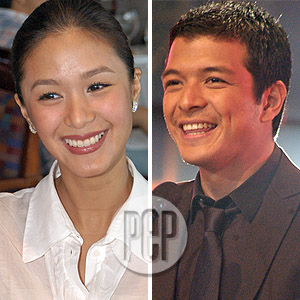 
PEP (Philippine Entertainment Portal) got the chance to ask Heart Evangelista questions that she would have ignored when she was so much into her "kalokahan" mode. But this time, at the press conference of her newest soap on ABS-CBN, Hiram Na Mukha, Heart poured her heart out.

First is the issue that the reason why she crawled back to ABS-CBN after transferring to Angeli Pangilinan-Valenciano's management was because she became "laos."

"If this question was asked to me before, I wouldn't have answered it," admits Heart. "Malamang hindi ko pinansin or inisnab ko. But because I owe it to the people my being here, sasagutin ko 'yan. And I know for a fact na the very reason I am in this business, e, dahil right after I crawled out of my Mommy's tummy, talagang acting na ang gusto kong gawin.

"I don't really believe na naghatakan kami pababa," she says. "I know what people's opinions were. Some were saying pa nga na karma raw, na it's malas daw. Para sa amin, it was just a stage na we had to pass through. We don't even look at it that way. We even became the happiest couple ever.

"There's no problem. I'm more comfortable answering these kinds of questions now. Like I said, I owe it to the people who are also concerned about me, to tell them what's been happening. Hindi naman ako yung tipo na naka-smile na nakaharap sa inyo now and later on, 'pag mag-isa na lang ako, e, mag-iiyak na lang ako."

Does she also pray for her detractors?

"I do, most of the time," replies Heart. "I know we go overboard with most of our judgement of other people. Normal, it happens. But now naman nga, lantad na ang buhay ko sa mga tao. Wala na akong itinatago.

"If I keep denying about something, it will take its toll pa rin on me. Kaya just like the story of The Boy Who Cried Wolf, ayoko ring dumating sa akin yung time na kung kelan nagsasabi na ako ng totoo, at saka doon walang maniniwala."

Getting hitched. Is it true that she and Echo are already planning to get hitched?

"I don't have a ring yet," she says while showing her fingers. "Oo, pinag-uusapan namin ang mga bagay about getting married, pero ang kasal will happen in about three to five years. I'm only 22. Siguro, when I'm 25 na, dun na 'yan madi-discuss lengthily. And if that happens, ia-announce namin 'yon. Ayoko namang mag-count ng chicks until they're hatched, sabi nga."

What's her dream wedding and how many children does she want?

"I want to have two to three kids, unless there's more that God will bless us with. I'm not pressuring Echo, huh! Baka when he reads this, e, mag-isip na 'yon. I know we both have so many plans pa with our careers now na things are coming pretty rosy.

"He might star in a soap with Sarah [Geronimo]. ABS-CBN was able to come up with something na mai-incorporate ang acting and singing for him. And ang alam ko, they'll use pa nga some of his songs in the soap," narrates Heart.

The Kiss. Heart is being paired again with Geoff Eigenmann in Hiram Na Mukha, a remake of a Viva Films movie that starred Nanette Medved, Cesar Montano, and Christopher de Leon. Do they get to kiss in their scenes together?

"Yes," answers Heart. "There are scenes to make the viewers kilig. Kasi nga, it's a romantic tele-serye. But not the kiss that people expect it to be. Insinuated lang.

"There's no problem with Echo as far as that is concerned," she clarifies. "Dahil ako mismo, ayoko naman. Like Direk Trina [Dayrit] said, there are ways naman of showing you deeply love a person. And you can't see that in a single kiss lang or a smack in the lips.

Does Echo visit her on the set?

"He did, once," she says. "But you know what happened? Nagkagulo sa taping! We were in Marikina, taga-roon naman siya, e. Pero first time nag-taping sa lugar we were in. Kaya when he came out of his car, nagkagulo at nagka-ingay ang mga tao.

Does she still cry a lot?

"Maybe it's because I grew up being so pampered lang in my life. But with all that has happened to me and my career, I have learned now how to become more patient, to be loved and be content with it. You can't imagine the wisdom I gained with everything that I was going through."

"Genesis made it possible to prioritize na may time kami ni Echo for each other, kahit na very hectic ang mga schedule namin. Naba-balance naman everything. E, kami naman, ganun din ang decision namin ni Echo. We have to do this this year, ito naman next year. We just have to be extra understanding with each other," says Heart.

Heart adds, "Echo rin kasi has so many plans pa. He has put up this company called Silver Moon. Sarili niyang production outfit dahil he plans to direct in the future. He wants to go into producing din. He has started to make na a video, yung 'Tuwing Nakikita Ka.' Eventually, he wants to produce movies na rin. Kaya focused naman kami with what we achieve this year. We know na he's the breadwinner sa family niya."

Jericho has started building his own house at the Loyola Grand Villas, where Kristine Hermosa, Gretchen Barretto, and other celebrities also live. Would that be their future love nest?