Are Janno and Bing getting back together? 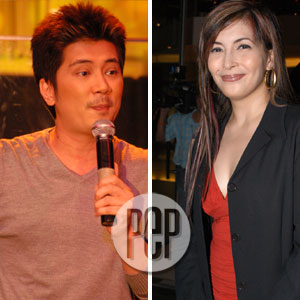 Reports have it that the ex-couple might soon be on the road to getting back together. Janno has reportedly moved back to their conjugal house in New Manila, but is said to be sleeping in a separate room.

"Actually, matagal-tagal nang maganda ‘yong samahan namin. May respeto kami sa isa't isa, e," said Bing about her relationship with Janno in an interview with The Buzz on April 15.

The two have been separated for quite some time because of undisclosed reasons. Rumor has it that it was due to Janno's extra-marital affairs. On December 2006, Bing went on the record that her husband and she are indeed separated, but remained friends.

Could the surprise birthday party be a sign that Janno is trying to pursue his wife?

This much is true: Janno made an extra effort to make Bing's bash extra memorable by getting fireworks.

Bing was asked by the reporters if she is ready for the upcoming "fireworks."