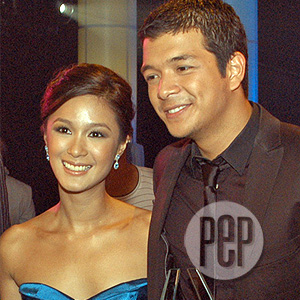 The relationship code of Heart Evangelista and Echo Rosales is blinking with the "going stronger" sign. After surviving the "disowned daughter" and "abortion" issues, the couple are set to prove that no amount of rain can wash away their love for each other.


Real-life celebrity couple Heart Evangelista and Jericho Rosales are making a comeback after their brief hiatus from the ABS-CBN TV scene—they were last seen together in the defunct fantaserye Panday in 2005.

Now, Heart is all set to star in ABS-CBN newest sineserye Hiram na Mukha opposite Geoff Eigenmann and TJ Trinidad, starting Monday, April 23. Jericho, on the other hand, is focusing on his music career.

Thier love story rather had a turbulent beginning due to the different issues and intrigues that were thrown at them.

Against all odds? It was reported that Heart's parents—Reynaldo and Cecilia Ongpauco—firmly disapproved of their daughter's relationship with Jericho, who is not even a high school graduate.

In an interview with YES! magazine last June 2006, Heart explained that it's normal for her dad to be very protective of her. She added, "Any man that I'm going to marry, he'll think first, parang kung puwede daw bang hindi na lang. He'll always love me selfishly."

However, the young actress denied the rumors that social status was an issue to her father. She explained, "My dad worked his way up to where he is now. So, he's not like that. He's not the type naman who would...porke't ganyan. Or matapobre, he's not like that."

Pregnant or just asthma? Early last year, rumors about Heart's pregnancy began to spread. The issue was intensified by her announcedment on TV that she'd take a U.S. vacation. The tabloids began speculating that the young actress went to U.S. to have an abortion.

In a YES! magazine interview, Heart said, "A lot of people still believe that I got an abortion. I felt really bad. I felt like everywhere I go, parang nilalagyan nila 'ko ng dumi."

She continued, "I felt like everything I've worked so hard for was parang trinash. That's the painful part. It was all because of a lie! I told them nga, e: ‘If you want you could interview my doctors. If you want to interview St. Luke's [Hospital], tanong n'yo.'"

Heart explained that her asthma attacks made her frequent the hospital. In fact, on the set of Panday, Echo was very much worried about her girlfriend's health.

Echo said, "That was the hardest thing, because we were going through so much. Of course, as her boyfriend, I never had something like this, so serious na ganito, di ba? Talagang it's a medical case na grabe."

Fast forward. The issue just died down. Heart and Echo did not renew their contract with Star Magic, and moved to Angeli Valenciano's Manila Genesis Entertainment, Inc. Heart said in a TV interview that her decision to transfer to Genesis was not just for her career's overhaul, but also her personal life's.

Heart makes her comeback on TV and sticks to her "wholesome" image. In fact, she has turned down offers to grace the covers of some men's magazines.

The actress said she was offered to pose for the first issue of Maxim but she did not accept it, "Nag-meeting din kasi, e. We made sure na yung captions na nakalagay, walang bastos or anything. But the thing is, the brand itself says a lot, and for endorsements, it is not really a good thing kasi the endorsements are still gonna look at that."

Aside from posing for a daring pictorial, the young actress is no longer open to the idea of doing a kissing scene. In fact, she refused to do it with Geoff Eigenmann, her leading man in Hiram na Mukha. The young actress affirmed, "I don't think I'll do anymore kissing scene because I want my parents to see me that I'm making the right choice."

Heart was referring to her first real kissing scene with Jericho in Panday. She reiterated in ABS-CBN's press conference for Hiram na Mukha, "If you were really to think about it, why would you not want the kissing scene now, eh you did already before. The thing is, yun na nga, I've made some mistakes and I would like to correct it to my parents."

And just like Heart, Echo also keeps his "wholesome" image. The former Hunks member said to YES! magazine, "Well, I have things that I like to do, and I have limits for myself. I like being wholesome.

"Here in the Philippines, if they see you...based on my own experience...I don't want them to see me in a scene na parang makikita nila ako in real life. For example, they saw me Angelo in Pangako Sa'Yo before, and they think I am Angelo [in real life].

"If I showed my butt in a scene, or something na parang nang-aakit ako, they'd think in real life that I'm like that. It's a very sensitive problem."

Another reason that the couple gave to reporters about maintaining a wholesome image was their convictions. Heart said, "I guess, I have certain convictions, I believe in certain beliefs."

Now, Heart and Jericho are back on track, and their relationship is definitely much, much stronger.