A Chat with Lloyd Samartino 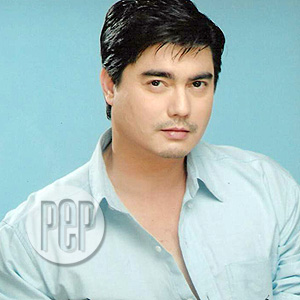 Lloyd Samartino's last TV apperance was in 2002 via GMA7's TV series "Habang Kapiling Ka," with Angelika dela Cruz and Snooky Serna. After five years, he is back! The mestizo actor will play a dad-role to Bobby Andrews and Eda Nolan in ABS-CBN's "Walang Kapalit."

Yes, actor Lloyd Samartino's business now deals with building buildings, erections so to speak. PEP (Philippine Entertainment Portal) got the chance to have a one-on-one session with him during the presscon for "Walang Kapalit," topbilled by Piolo Pascual and Claudine Barretto.

It was a breeze to see an old friend who's back into the game he has always loved.

"I have my own company now. Yung apartment in Makati where we lived, and where you and most of our friends spend the day, is still ours, pero pinapa-rentahan na namin ni Mommy [chanteuse Carmen Soriano]. But I still live in Makati."

Back in the 80's, Lloyd's career boomed with his outstanding performance in "Gabun." He also did several projects with the greatest directors of his time—Lino Brocka, Ishmael Bernal, and more like Maryo J. delos Reyes.

And he went on reminiscing the good, old days.

"Those were the Golden Years, I should say. The superstars—from Nora [Aunor] to Dina [Bonnevie]... Though I only worked with Brocka in "Strangers in Paradise" with Snooky [Serna] and Tom Babauta, there was so much to remember sa pakikipagtrabaho sa kanya. But after a while, no, hindi naman sa tinamad ako, but there were no more roles available o bagay na para sa akin.

Why did he suddenly disappear?

"I had to leave lang after that. Naiba ang takbo ng buhay ko because I got married din, eh. I was in the US before I got married [to then-presidential daughter Jo Ramos]. And while I was in the States, gumagawa naman ako doon ng mga movies. Nagdi-direct ako, and there was this project where I directed Tita Celia [Rodriguez] in "Corazon." Ang katrabaho ko noon was Toto Belano.

"Ang punto ko naman that time since the roles being offered to me were getting scarcer, sabi ko, ‘magugutom ako kung maghihintay lang ako ng projects para sa akin.' So, I decided to go there na lang muna and stay with my Mom. And doon, nakaisip na ako na have my own business.

His marriage didn't work out.

"But Jo and I are still very good friends."

And his marriage to Jo gave people the reason to drag his name into government-related matters, like this taxi issue which erupted on the news years ago. Did he really own that line of taxi at the NAIA (Ninoy Aquino International Airport)?

Is he staying here for good?

Lloyd admitted that he almost gave up.

"At some point, I was getting frustrated na. And looking back now, wala naman akong ire-regret sa naging decision ko. Kasi, tama lang that I had to stop. I was able pa to spend a lot of time with my Mom who got married to a doctor in the US. I did the right thing.

"And kahit naman nung I was married na, I told my wife naman I still would want to go back to acting, eh. It just so happened na wala sigurong mga roles for me then."

Or maybe, a lot of people got reluctant in getting him since he had his own world being the presidential son-in-law.

And there's still this gnawing thought.

"Parang alam ko na ‘yan. You're really a friend na hindi mapapakali until so many things are answered. What is it?"

You were not spared from issues regarding your gender—this "kabaklaan" thing. A lot of times, you and Albert were played up in so many articles, and even blind items, na naging kayo.

Since in some ways, he was able to taste the life of being in the world of politics, is he, in the future, planning to get a taste of it for real?

"Noon, marami ng humihikayat sa akin to get into politics. Hindi pa ako ready, eh. Kailangan, when you throw your hat into the political arena, bukas ang sarili mo sa ganoong mundo. Hindi ko pa kaya'ng maging ganoong ka-open to that. Mas masaya ako ngayon doing something I like best, getting back to being an actor."

"I am a father, and a good one at that in real life. My boy is already in his teens, so believable."

Is he still that very private Lloyd?

"I guess my life has already been an open book. There are some things though, gaya ng mga katatanong mo lang sa akin na for a time were left unsaid and unanswered. Only a friend can ask those things, and say I'm into erections!" ended Lloyd with a laugh.