Angelika dela Cruz in her Palace 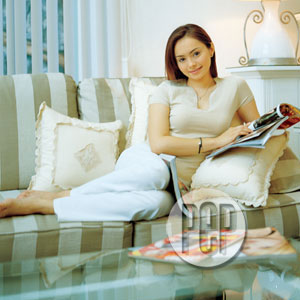 Angelika's life is almost like a telenovela, but without the villains. Her father, Ernesto dela Cruz, used to be a member of the Bayanihan Dance Group. On one of the troupe's many travels abroad, he met Angelika Egger of Austria. He brought her to the Philippines, they got married, and they had two children, Maria Lourdes and Edward.

Maria Lourdes, known as Sunshine at home, is now Angelika dela Cruz, having borrowed her mother's first name to use as her screen name.

Mr. dela Cruz eventually dropped out of the dancing profession and shifted to the business of talent promotions, which allowed him frequent visits to Japan. He often took his wife with him.

Mrs. dela Cruz soon found a lucrative job as a German-language teacher in Japan, and she ended up staying there for 13 years. During that period, the marriage fell apart. The formal separation came in 1992, when Sunshine was 11 and Edward was 9. It was, however, a very friendly break-up. The kids were left in their father's care, while their mother kept them posted from abroad.

When Sunshine turned 14, her own life took a different spin. She auditioned to sing the theme of the canned cartoon series "Sailor Moon." Backed by her father who had a knack for performing, she made it. That became her ticket to mainstream show business.

At ABS-CBN, she became part of two soap-opera hits, "Mara Clara Book 2" (1996) and "Esperanza" (1997), plus the defunct teen hip horror show "Okatokat." Along the way, Angelika, whose real intention was to become a singer, also landed recording deals, one with BMG Pilipinas and one with Imperial Records, which succeeded in selling her album in Japan.

As these successes were happening in Angelika's life, her parents' married life was unraveling. Even before the marriage was finally annulled ten years ago, Mr. dela Cruz became father to another boy, Erick, now 20, whose mother is Japanese.

The former Mrs. dela Cruz, for her part, became mother to a girl, Mariko,11, whose father is also Japanese. These relationships did not lead to second marriages but also ended in separation. Yet in the course of all these events, the former husband and wife managed to become even closer as friends.

These days, the former married couple are living under the same roof, together with their two children and the two other children they have begotten from other relationships. Happily, the six-bedroom house allows them to have a room each.

In the beginning, there was a debate about building the new house in Malabon. Angelika and her mother, who's now back to being Ms. Angelika Egger, wanted to transfer location. Her father, feeling very attached to the place, did not. In the end, he won them over.

But the decision to stay in Malabon was also prompted by—who would've guessed?—a political career for Angelika. She has been wooed by contending political parties to run for councilor. And as early as now, Angelika is seriously considering going the way of Vilma Santos.

In any case, the house construction took over a year to finish. But now Angelika's house is a dominant sight in Barangay Longos, Malabon City. And the drama actress seizes every moment she can spend in the house she helped build.

At the moment, she really has nothing much to ask for. But she still dreams, and part of that dream is to own another house.