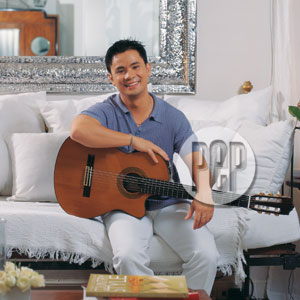 Five years ago, Ogie Alcasid lived in this house with Australian wife Michelle van Eimeren and their two daughters. The songwriter described it then as a "functional house." He said, "Michelle can work on her pottery. I can work in my music room." It's also a very convenient and practical place. "There's a pool. Kami ng anak ko we swim, we go to park with other kids, you know you experience a real nice family lifestyle. The malls are

The past five years have been "wonderful" for Ogie Alcasid. With reason.

One, he has been consistently part of two regular TV shows going—"SOP," "Bubble Gang."

Three, his Valentine concerts have been tremendously successful—from his first major concert "O.A. sa Hits" (2002) at the Araneta Coliseum, to his most recent collaboration with Regine Velasquez in "The Songbird and the Songwriter" (2004). Recently, he did "Love to Laugh" with top comedienne Ai-Ai delas Alas.

Ogie—composer of such popular love songs as "Bakit Ngayon Ka Lang," "Kung Mawawala Ka," "Mahal Kita, Walang Iba," "Ikaw Sana," "Hanggang Ngayon," "Sana Ay Ikaw Na Nga," and "Pangako"—is very happy because he has gotten recognition in the industry not just as a singer, but as a songwriter as well.

"This is really what I do," says the then 40-year-old singer-composer. "Since I started my singing career, 15 years na 'yan talaga ang ginagawa ko... I think the most exciting part of my career now, kasi I've done from TV to movie to recording, now I think I'm being recognized as a songwriter. And I really, really, really love that because that's who I am really.

"And I'm a comedian, yes. I'm a host, I do all that but, you know, if you take the core of me, that's really what I do, you know. And it took a long time for me to establish kasi nga, as I said, I wasn't trying to pressure myself, ‘I have to be a songwriter.' Parang it came. It came at a time when Regine (Velasquez) asked me to write a song. And then ‘Bakit Ngayon Ka Lang' was revived (by Pops Fernandez and Freestyle). ‘Pangako' was revived (by Regine). All these songs are becoming hits again and relevant, and now I get more work really from writing songs."

"They asked for my song!" says a very flattered Ogie. "I'm getting calls to write songs for other people. Like for Pops, I wrote two songs for her. She called me. Sabi niya, ‘Can you write me a song?' Challenge e."

So he gave her "Ikaw Na Nga Kaya" and "Bakit Ka Lumayo."

But even after 20 years of writing songs, Ogie says he does not know what would make it to the top of the chart.

"I will say, ‘Yes, I have a good feeling about this song.' I feel, but I never really try to put my hopes too high, kasi baka iba naman ang pagtanggap. There are times that I made mistakes, miscalculations. It's also reflective of the times. There are so many things you have to consider: if it will be played on radio... And music changes constantly."

And adapt to changes.

Ogie disagrees. "No, no, that's one thing I learned. You stick to what works well for you. Don't try to change kung ano ka kasi maninibago 'yung listeners mo."

Not even to experiment?

"No," he stresses. "I just trust my instincts. I trust what feels nice, what feels right, what sounds good, what kind of message in a song sounds parang relevant to Pinoys. Gan'un 'yan e. You gotta have to give to them what they want. Hindi 'yung you give them what you want to give. Your purpose is to entertain, not to entertain yourself."

Where is he now after 15 years?

"Mas comfortable, it's very comfortable," he says. "I'm at the stage in my life and in my career where, yes, I do have to prove a lot of things but I don't wanna pressure myself to do that. Parang everything's so good e, so blessed—the TV shows, the recording career, now I'm trying to go back to the movies again... Parang the movie industry is trying to make a comeback so parang I went with the tide all the time, didn't try to do anything radical. So it's very comfortable, hindi ka ngarag, alam mo 'yon? The right amount of pressure which is actually inspiring.

"For example, a concert. When you think about it, it's really a creative process e. 'Di ba you have to create a show? So the process of putting up that show is your project, how can it be entertaining? How can it make money?

Does he regret not singing his own hits, like "Kailangan Ko'y Ikaw" which became Regine's song in her box-office movie with Robin Padilla?

"No, kasi I wrote it really for her movie. As I told you, my heart is in songwriting. So people call me singer-songwriter. It makes me feel proud, parang it's close to home. I don't profess to be a great songwriter. But it's what I love to do. So many brilliant songwriters, profound, deep, you know, art. I'm not that. I just write songs."

That make the whole world sing...?