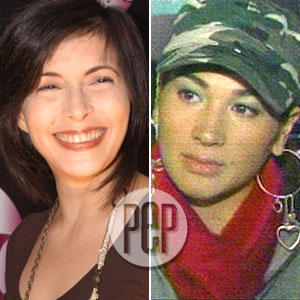 "...Yes, I am very blessed. I've been given another chance to make friendship flourish with Jackie. I am humbled by this. No amount of words can describe how happy I am. I wish her all the best," says Bing Loyzaga (left) about her reconciliation with Jackie Forster (right).

In the year 2001, on the set of the movie Tusong Twosome, two of the lead stars were rumored to be having a relationship outside work. In any other production, this would be good promotional material for the film, but not in this one. The two leads being linked were Janno Gibbs, who was very much married to Bing Loyzaga, and Jackie Forster.

It didn't take much fire nor smoke for the issue to cause the inevitable. Bing was said to have stormed Jackie's house and confronted her husband's alleged other woman. Bing and Jackie haven't spoken in six years.

Six years after, on April 15, The Buzz got this text message from Bing Loyzaga: "Hello! Want to share with you the good news. Saw Jackie Forster at the 7 p.m. service in Victory [Christian Fellowship at The Fort, Taguig]. We hugged and made peace. God is great!"

Jackie, for her part, also had something to say about the chance encounter in an interview with the same Sunday entertainment program on ABS-CBN. "Bale tapos na ‘yong service," Jackie said. "Actually, before it even finished, I felt someone come in. And then pagtingin ko, umupo na. In the corner of my eye, parang I thought I saw someone who looked like Bing Loyzaga.

"Focus na uli ako sa service. Nakinig na ako. Nawala na sa isip ko ‘yon. I saw a girl friend of mine, whom I was happy to see in church. I stood up, tapos na iyong service. I said hi to my girl friend.

"When I looked [at the person whom I thought was Bing], it was really her [Bing]! And she had a smile on her face! I walked over to her and I gave her a hug."

Jackie described the moment: "It was parang surreal, e. I don't know exactly what was said. Basta I know she asked me how I was. I asked her how she was. I told her she was looking good, and she does look good."

Meantime, Bing sent another text message to The Buzz expressing her feelings about the fateful meeting.

"...Yes, I am very blessed," Bing's message went. "I've been given another chance to make friendship flourish with Jackie. I am humbled by this. No amount of words can describe how happy I am. I wish her all the best."
Read Next
Read More Stories About
Bing Loyzaga, Janno Gibbs, Jackie Forster
Post a Comment
Featured
Latest Stories
Trending in Summit Media Network