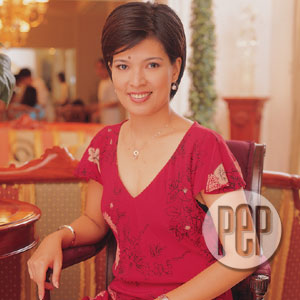 Lani Mercado says she would rather concentrate on raising her six beautiful children than waste time thinking about rumors. For above all else, her family comes first. She turned her back on show business for them, after all.

Twelve years later, on March 25, 1998, Lani said "I do" again to Bong in a grand centennial ceremony at the Imus Cathedral.

The big wedding may not have been necessary, Lani says today. "Sa akin okey na 'yung sa States eh. It was Bong who decided to have a church wedding."

Kibitzers said that Bong, at the time the appointed governor of Cavite, may have married Lani a second time in a big way to dispel rumors linking him to his screen partners.

Whatever her husband's reasons were, one thing emerged. The wedding, extensively covered by media, was good for Bong's image. In the elections that followed two months later, he was elected governor.

Lani was always by Bong's side during his six years as governor. She was also by his side when he decided to go to Edsa Dos to voice dissatisfaction with then President Joseph Estrada, godfather at his wedding and father of his barkada Jinggoy. In the elections that followed Edsa Dos, Bong was not reelected.

"It was a disappointment for him," Lani admits. "He lost his friends dahil d'un sa pag-akyat niya sa Edsa [Dos stage]. He was really down."

Then Lani adds, this time with a smile, "Feeling ko we're still blessed. Kasi when you lose some, you gain some. Kagustuhan siguro ng Diyos."

The May 2001 election results turned out to be a blessing in disguise. He didn't win the gubernatorial post because he was bound for a senatorial seat. Come May 2004, he placed second in the senate race.

The house-hunting adventure. The family has hopped from house to house in the attempt to find the perfect place they could call their own. Their family home in Cavite, which remains open to the public to this day, could not offer the privacy they needed.

"Ito 'yung pinakahuli," her son Jolo lets it be known.

Lani and Bong were in fact interested in the Alabang area because at that time, the kids were studying in La Salle Zobel.

She's glad to say they got the house at a relatively low price. "Malaki ang nabawas n'ung tinawaran namin," she smiles. "'Tsaka the old couple needed the money badly."

She and Bong think their second-hand house is in fact a bargain. "Parang prime lot nga, kasi we're just a lot away from the golf course and it's just walking distance from La Salle. So if in case walang susundo, the kids can just walk home."

The selling price, she notes, included the furniture. They did a few more repairs and construction on the site: fixing the outdoor lighting, reupholstering, repainting, changing doors, re-tiling the terrace, setting up a waterfall by the pool, transforming Jolo's room to a "guy's room," constructing a balcony on the second floor, and landscaping the garden. But no one in the family complained.

"Everybody naman siguro likes to see beauty in his home. Or comfort," she reasons. The family like to stay in the garden, plus they like swimming.

Needless to say, their new, carefully-appointed Alabang home has all the perks. But its best feature is that it gives the family total privacy.

Family Woman. Meantime, talk linking Bong to his leading ladies has not died. Lani sees that as part of show business and does not react even when a new name is added to that list. "Dahil artista din ako, naiintindihan ko na trabaho lang talaga," she says.

She says she would rather concentrate on raising her six beautiful children than waste time thinking about rumors. For above all else, her family comes first. She turned her back on show business for them, after all.

Lani is happy she made that decision. When she became a mom, her purpose in life changed: keep family and home in one piece.