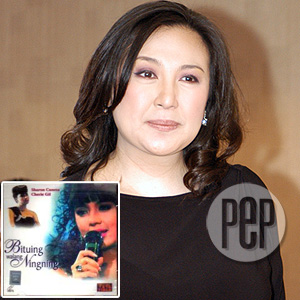 Sharon Cuneta, then and now: After starring in over 50 films, Sharonians select their favorite flicks topbilling their idol.

Dramatic actors and comedians alike have their own versions of the famous line: "You're nothing, but a second-rate trying hard copycat!"

Soon after Cherie Gil (as Lavinia Arguelles) said this spiteful line to Sharon Cuneta (Dorina Pineda) in the movie Bituing Walang Ningning, a star was born—but not just any star—it has outshone all other stars on the horizon. This 1985 Viva Films production catapulted its lead character to Megastar status.

To top it all off, the award-winning actress herself gave her insights and anecdotes about these chosen films.

Incidentally, when PEP (Philippine Entertainment Portal) interviewed Sharon last January about TV remakes of her blockbuster movies , particularly Dear Heart, she considered these films as "sacred" and that no one else has the right to portray them again.

Why it was chosen? Famous for Tita Shawie's memorable line to Christopher de Leon: "I am just your wife."

In Madrasta, Sharon plays Mariel, a woman who is finding her way in the hearts of her stepchildren, at the same time, filling in for the kids' mother who abandoned them. In the end, she will realize that in order to achieve this, she must learn to accept and love herself.

Why it was chosen? Onscreen partners Sharon and Gabby Concepcion fall in love while filming this movie, resulting in marriage and a daughter: Maria Kristina Cassandra.

Tita Shawie's first major film was a sensational hit, and it also gave birth to die-hard fan clubs for the Sharon-Gabby tandem. This film about young love and first love gave critics mixed reviews on the movie and as well as Sharon's acting skills. Nevertheless, it was a sweet treat to the growing number of Sharonians.

Why it was chosen? Famous for the "copycat" line plus the very dramatic splashing-water-in-your-face scene. The '80s people would definitely recognize Cherie Gil's famous line: "You're nothing, but a second-rate trying hard copycat!"

The Megastar is Dorina Pineda, an aspiring singer who idolizes Lavinia Arguelles, played by Cherie Gil. Dorina worships Lavinia until she is discovered by Nico Escobar (Christopher de Leon), Lavinia's boyfriend and manager. After a feud between the two lovers, Nico grooms Dorina for stardom with the goal of knocking down Lavinia from her pop star throne.

The movie won Best Original Song at the FAP Awards. It was made into a TV series in 2006 by ABS-CBN, with Sarah Geronimo reprising the role of Dorina.

Why it was chosen? Gabby (as Lito) leaves behind his pregnant wife, Sharon (playing Myrna), for an older woman.

Another heart-wrenching movie from the era's most-loved couple, Sharon and Gabby. Dapat Ka Bang Mahalin? portrays a couple who enters marriage even though they aren't prepared for it. Unprepared and immature, their relationship crumbles as Lito (Gabby) falls in love with an older woman, leaving Myrna alone and pregnant. Abandoned and betrayed, Myrna struggles to survive on her own and for her child. The movie earned a Best Actress award for the Megastar at the FAMAS, as well as the Best Story Adaptation during the FAP Awards.

Why it was chosen? Sharon shows her comedic skills alongside Hilda Koronel and Angel Aquino.

A story about hope and triumph, Crying Ladies features three professional mourners in Chinatown with a hilarious sense of comedy. They are played by Sharon, Hilda, and Angel. Sharon is Stella, who struggles a living to maintain custody of her only son, Bong (Julio Pacheco).

The said movie was also recognized by film festivals abroad. There were actually rumors that it almost made it to the Academy Awards in Hollywood.