Ruffa Gutierrez: "Please pray for me." 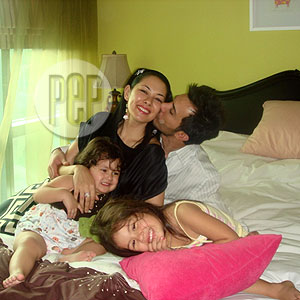 This is just one of the nine photos sent by Ruffa Gutierrez to PEP (Philippine Enetrtainment Portal) last January 26, 2007, when Yilmaz Bektas celebrated his first Christmas in the Philippines. Ruffa wrote the captions herself: "PILLOW FIGHT ALERT! I get a loving kiss from my husband after a huge pillow fight that Lorin and Yilmaz instigated that

The "marital problems" of Ruffa Gutierrez and Yilmaz Bektas have been a recurring issue. But Ruffa was always quick to dispel rumors saying she was estranged from her Turkish husband.

The only daughter of Eddie Gutierrez and Annabelle Rama would openly admit some of the petty quarrels she would have with Yilmaz, but her admission would usually be overshadowed by all the good words she would also say about Yilmaz and their marriage.

Happier times with Yilmaz. Her blog, Ruffa's Mindspeak, is actually a testament to the fact that Ruffa raves about being a wife to Yilmaz and a mom to her two daughters. There isn't an entry that fails to make mention of her "lovey dovey," her "princesses," and her life outside the country.

"Now that I am a wife and mother, family comes first. I only carefully accept projects that fit my new roles and make sure I have my husband's approval. I believe that because I am able to balance all these things, I am a better mother and even a better wife. I didn't have to lose my identity when I married Yilmaz. Feeling ko nga, mas attractive ako sa mata ni Lovey whenever I switch to the simple Ruffie Pinay at home from Fab Diva when we're out."

"At around 7:30 PM, La Greta (Gretchen Barretto), arrived in her sheer Valentino dress whining at how the house seemed so quiet without the kids—Lorin and Venice. Sniff. Sniff. (Yes, I miss them, too.)"

"At the end of the day, it's neither the glaring eye of the public nor the razzle dazzle of showbiz that's most important to me. It's looking forward to going home to my loving husband, and whispering sweet nothings to my two little angels' ears while we're tucked in bed reading bedtime stories. Those are precious moments that not even all the designer clothes and my collection of Manolos can ever out-best."

"And now I'm cramming, trying to pack my stuff for the Easter break. Ooh, I can't wait to be in the loving arms of my Lovey Dovey once again! :-)"

"I did convert to Islam shortly after I married Yilmaz, but as I continuously read the Koran and books about Islam, Yilmaz and I also read the Bible. Knowledge is power."

"By May's end, I'll most probably be in Europe, and Kris will be back to entertaining you on Sunday afternoons."

Even in her phone calls, Mrs. Bektas has always mentioned Yilmaz's name, and with a giggle, too.

So her announcement today (May 8) on Ricky Lo's column—four years and two months after they held their world-class wedding—was truly shocking. And the text messages she sent, confirming the split, were heartrending.

"It's really sad...goodbyes are never easy. jun [Lalin] has my official statement...will most likely be ready to speak on sunday. please pray for me as i go through new changes in my life. Thanks for being a friend. Love ya!"

Sent to me as managing editor of PEP (Philippine Entertainment Portal):

"I sent you my statement...pls pray for me as i go through this difficult time...i will be ready to speak on Sunday...thanks thanks."

A Life without Yilmaz. Now, the more pressing questions are—What happens next? What happens to Ruffa and her kids?

PEP consulted with Atty. Sandra Marie Coronel of the Yorac Arroyo Chua Caedo & Coronel Law Firm about the legal implications of Ruffa's and Yilmaz's decision to go their separate lives.

Atty. Coronel says: "Because Ruffa is a Filipino citizen, her property relations with her husband is governed by Philippine law, and under Philippine law, hati sila sa lahat. Everything that the couple owned at the time they got married, and acquired, or earned, during the marriage is considered community property. She [Ruffa] has the right to half of everything [the community property]."

Their kids will prove to be an even more substantial issue to tackle. The Bektases, according to Ruffa stories, truly love Lorîn and Venice. In fact, the former Miss World Second Princess had to secure the approval of her in-laws before she got her two princesses included in her latest TV commercials.

It will also be remembered that in December 2003, the couple had a fight because Yilmaz was appalled by the idea that Ruffa would travel from Turkey to Manila with Lorin, who was three months old at that time. The TV host-actress had planned to attend her Mom Annabelle's birthday celebration.

Atty. Coronel notes: "Being the children of a Filipino mother, Philippine law likewise governs the issue of custody of the Bektas children in the face of their parents' separation. Since below seven ang mga bata, our law says custody goes automatically to the mom, except when the Court finds compelling reasons to order otherwise. Yilmaz, being the father, of course, still has rights to his kids in the form of visitation, among others."

When it comes to financial support, the "general rule is the amount of support will depend on the capacity of the father and needs of the children."

The lawyer adds, "Of course, the amount should be in keeping with their established lifestyle. Kailangang ma-maintain ang lifestyle na nakasanayan na nila."

Ruffa's and Yilmaz's joint statement to date implies that they already have plans to explore their legal options: "All issues and formalities concerning the dissolution of the marriage shall be done in accordance with applicable laws in the most cordial, amicable, and private way possible for the benefit of all concerned."