Ogie and Michelle: Happy together (Part 2) 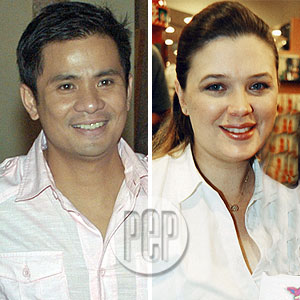 Ogie Alcasid and Michelle van Eimeren starred in a movie titled Manolo and Michelle: So Hapi Together in 1994. That was also the same year they met and got married.

THE CATALYST. Close friends of the couple describe Michelle as an ideal wife—a home keeper who would rather stay home and attend to her husband and kids.

So, what's the root of the problem?

One possible cause of the fallout, according to sources, was Michelle's long physical absence—she decided to give birth to their second child in Australia. Michelle left when she was seven months pregnant with second daughter, Sarah, and she returned when her baby was already a month old.

"It was only three months but it must have tested Ogie's patience," speculated one reporter.

Others surmised that Ogie must have fallen out of love when Michelle gained considerable weight after her second pregnancy. "She ages beautifully," Ogie quickly corrected.

"Yes, she's a beauty queen, but Michelle is a human being. She's sincere, she's honest and she has honest feelings," he continued.

But these reasons were petty compared to the real cause of the reported split.

"March (2003) pa lang may nangyayari na," relayed one source, referring to Ogie's alleged involvement with Regine Velasquez. This bit of information was then considered as quite doubtful, given that Regine—during the said period—was in the States with Martin Nievera on a concert tour.

But the rumors were persistent.

The relationship was said to be less platonic, although the stories divulged were less flattering.

"Physical lang... siguro silang dalawa at that time and the opportunity was there. They could've given in to the moment," uttered one mole.

There's also this story that Ogie, when confronted by his wife about the rumors, directly acknowledged his infidelity. Ogie was said to have admitted, "Yes, we're going out." He allegedly added insult to injury when he insensitively assured Michelle that he used protection (condom) the first time he and Regine did it.

THE MOVE DOWN UNDER. Many were perplexed when Michelle, along with the children, moved back to Australia in 2003, not just for a vacation but to stay for good.

At the time of the interview, Ogie justified the transfer as a mutual plan. The couple had purchased a four-acre lot in Robertson, New South Wales.

According to Ogie, living in Australia would enable Michelle and the children to lead a more normal life—a complete turnaround from their lifestyle here as a celebrity couple.

"The independence that she enjoys there is greater. There, she controls her life and her individuality. Me, on the other hand, I think it's a better place for the kids to grow up, especially where we are. It's a country town, the kids are more respectful, there's less violence. In fact, none."

That statement contradicted the rumor that Michelle's permanent return to Australia was mainly Ogie's idea to finally get rid of her. A bold declaration that the marriage was finally over.

Two sources said that Ogie allegedly handed Michelle three one-way plane tickets last June of 2003. "It's better if you stay first in Australia with the kids. Pack your things, the movers are coming... I don't love you anymore," the songwriter reportedly said to his devastated wife.

Again, he said that those tales were mere exaggerations of the real score.

"That's not true. Why would I say that? I would rather that they stay here with me for us to be a complete family. But wala, we already made a decision and we're just following what we've always wanted to do—and that is to live in Australia, and we've made the big move."

That same year in July, when Michelle was already residing in Australia, she granted a phone patch interview to Partners: Mel & Jay. She talked about her family's decision to pursue individual life journeys.

When quizzed by YES! through a long distance phone call, about why she cried during the interview with Mel Tiangco and Jay Sonza, Michelle blurted out an answer that compounded more questions.

YEARS LATER. On hindsight, Ogie's recent decision to come out clean through the same publication was seen by many as only appropriate, considering that the issues hurled against him back then, had remained consistent until his startling declaration.

In 2003, Ogie, on the surface, sounded like a man torn yet maintaining his balance to protect his personal space and definitely his family.

"I think this is something that my wife and I will surpass," he said, stressing that the entire issue would only make their union stronger.

The article ended with Ogie prophetically quoting, "As they say, the truth will always come out and it will always set you free. So be it."

In the end and barely four years later, it certainly did.