John Lloyd Cruz gets more liberated with his fashion sense 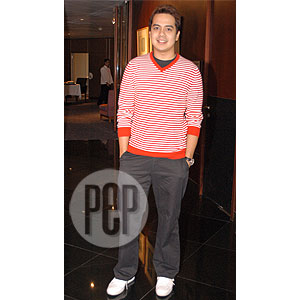 John Lloyd Cruz admits he is being influenced by his girlfriend Liz Uy—who is a fashion editor in Preview magazine—with the transformation of his taste in clothing. He adds, "[She gives advice], especially with colors kasi magaling siya, para siyang colorist, e. Minsan nagsha-shop kami together, so doon ako natututo."

Actor John Lloyd Cruz looked very happy when he arrived at the press conference prepared by Star Magic for his 24th birthday on June 24, at 9501 Restaurant in ABS-CBN Compound yesterday, June 21.

When the interview started, the members of the media immediately noticed the change in his fashion sense. He was wearing a red-striped, long sleeved shirt over a dark colored shirt, black pants, white sneakers, and sunglasses.

In the earlier years of John Lloyd, according to one of the reporters, he would be seen wearing just a simple shirt and pants, with no accessories. But now he's trying to mix and do some layering with his clothes.

He adds, "I enjoy it now. Naging bold 'yong approach ko with colors, with style, and sometimes I dare myself to be different. May mga ganoong moods, may mga ganoong pagkakataon."

Do these changes mean he has turned into a fashion slave?

He still goes for comfort over style. "Hanggang ngayon naman, e, I have to be comfortable. Comfortable in the sense na kapag tiningnan mo sarili mo, pakiramdam mo komportable ka."

While some of his fans see the transformation of John Lloyd's fashion sense positively, others say he's beginning to look like a gay with his outfits.

As for the criticisms, whether they're good or bad, John will just continue ignoring them. He'll wear whatever he wants yet he also understands that—"Dito siyempre di mawawala [ang criticisms], siyempre dala nga ng culture, especially artista ka. Parang iba yung pinagsimulan mo and iba yung nakikita nila ngayon, so I have to be open to criticisms."