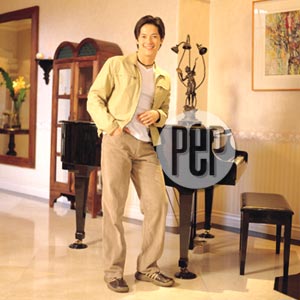 Rustom Padilla give us a glimpse of his home. Asked why he decided to have the piano here, he answered: "I pictured, 'pag magkaroon ako ng bahay magpapa-dinner ako, gusto ko may piano. ‘Yun lang yon." (YES! July 2002 issue)

Rustom says that as far as he can remember he's never had a chance to live independently. When he was a student in Baguio, he was under the watchful eye of his mother, the strong-willed Eva Carifio."Napaka-istrikto sa akin ng nanay ko kasi nag-aalala siya na baka mag-addict ako," Rustom recalls.

Rustom, a Jehovah's Witness, married Carmina Villarroel, a Roman Catholic, in civil ceremonies in 1994. They separated in 1997; there were no children. More than three years after, in January of 2001, Carmina gave birth to twins by partner Zoren Legaspi.

For a time, so depressed was Rustom over the separation that he told a showbiz columnist: "For three years, I didn't touch anything inside our house. But when I heard about Carmina's pregnancy, para bangit knocked me back to my senses. Time to move on. Tapos na ang paghihintay. I felt n'un the house was waiting for somebody to come back. Now the waiting is over. Wala nang hinihintay 'yung bahay, wala na akong hinihintay na bumalik pa."

He then turned his attention to something physical and solid: the transformation of their two-story structure into an impressive environment. Says he, "Actually,itong bahay na ito nag-umpisa walang laman ito... Ito lang sofa, ito lang piano. Tapos hindi ko ginagalaw—bare." Little by little, he started filling it up with pieces of his own choosing.

His first big purchase was a dining set good for eight people. Next, he converted a room on the first floor that was serving as a mere bodegainto a music room with comfortable sofas, a hi-fi stereo component, and wide-screen TV. As far as decor went, he trusted serendipity—that is, when he chanced on something nice, he bought it. "Hindi ako naghahanap kasi 'pag the more na naghahanap ka, parang ang hirap."

And that's when he decided to buy paint­ings! Among the works that adorn his walls today are works by Malang, a Madonna and Child by a new artist, and a colorful piece signed by a "Felichi" who, it turns out, is the actress Princess Punzalan. Explains Rustom: "Kasi she paints. Siya ang gumawa niyan, siya si Felichi, yan ang real name niya."

Next, he worked on the improvement of his garden: a land­scaping effort that has taken more than two months to complete. Says he, smiling: "Nakita ko 'yung garden ko... teka, hindi pa masyadong conducive sa party. So pinare-landscape ko lahat!"

Today, just as his home is shaping up slowly but surely, so is his career. His stint as game master on ABC 5's "Wheel of Fortune"—a show currently on hiatus—marked his return to television hosting.

Long before he played both bad-guy roles and romantic parts, Rustom was indeed a familiar sight on the noontime-show scene via GMA 7's "Lunchdate." He reminds us: "Ako 'yung Monday Delight nila, kakanta-kanta ako doon."

The fellow, already a resident of Parañaque then, made it a point to leave home early to avoid the traffic jam and be at GMA-7's Quezon City studios way before the 1 p.m. call time. A day came when his discipline and punctuality paid off.

These days, of course, Rustom is not just pinch-hitting. In 2001, he was cast as one of the Filipino leads in the Singaporean TV series Paradise. To promote the series, Rustom and his co-stars traveled to Singapore where they were feted at press conferences, beach parties, and media interviews and pic­torials.

Rustom says, not without pride: "'YungSingapore project was an experience. It's still an experience. I'm still under contract with them for two years. Just the mere fact that you worked for another country and nakikita ka doon, experience din. Okay ah."

In Yamashita, the Tiger's Treasure, chosen Best Picture at the 2001 Metro Manila Film Festival, Rustom played a small but marked kontrabida role that required him to radically change his look. Says he, "Very character ang ginawa ko. Medyo nasa serious side of acting, medyo talak 'yung role, the better for me."

After over 10 years in show business, Rustom says he is brimming once again with the passion he started out with but lost some­where along the way. "Imagine, in my first year I was doing three films. Second year, nagbibida na ako.Third year, I was doing my solo movie," he counts. Things were going so great for him then, he ended up mak­ing the mistake of relaxing and not giving 100 percent to his career.

Six years after this article was published, so many things had happened to Rustom. In 2006, he let out the revelation that he's gay. His admission was well-received by the public. And now, he's back once more in the local showbiz circuit.