Fame vs Privacy: A peek at celebrity video/photo scandals 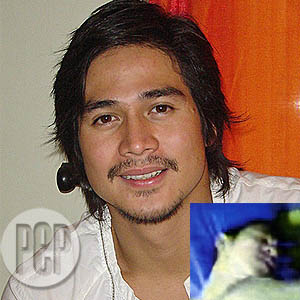 Matinee idol Piolo Pascual is one of the many Pinoy celebrities who has been victimized by video/photo scandals on the Internet. A sex video (inset) supposedly showing "Piolo" in a bed scene with another man came out. The actor vehemently denied this on national TV. Two other photos of Piolo—one showing him holding hands with Sam Milby and another with him piggy-backing Erik Santos—also circulated on the Net. These images were later proven fake.

The "kisscandal" involving celebrities Gretchen Barretto and John Estrada, which recently hogged showbiz headlines, has raised once again the ghost of dreaded video/photo scandals created and reproduced through digital technology.

Though such images always send shockwaves throughout the country, there's really nothing new about their production, which subsequently spreads to be feasted on by public viewers.

TECH BOOM. The revolution in electronic technology, particularly during the mid '90s has made a lot of things easier and more accessible. While complex to simple information can now be easily transmitted through the Internet or mobile phones, the price that comes with any technological advancement has its inevitable downside—transgression of privacy rights.

Most vulnerable to such violations are celebrities and high-profile personalities who, in spite of their stiff protests, are regarded as public property.

Columnist-TV host and talent manager Boy Abunda observes that "interesting"videos and photos are a hit because they're like pornographic materials starring celebrities, except that they're not acting. The fact is, these images are made to arouse the curiosity of the public—even better if the person shown in the video/photo carries a big name and reputation. "The bigger the celebrity, the better," says Abunda.

Abunda's view is shared by Maricel Vera, a professor in sociology, who says that a celebrity video or picture always arouses public interest since celebrities are widely known and familiar to most people, compared, let's say, to a college student being caught in intimacy with her equally unknown boyfriend.

"It's a natural reaction," says Professor Vera. "Kahit ikaw, if you have something like that in your phone or camera, ipapakita mo siya talaga, kahit lang to your close friends. That's human nature working there."

SCANDAL JUST A CLICK AWAY. Good friends Ruffa Gutierrez and Donita Rose are considered the earliest Filipino celebrities who became victims of Internet scandal. Their pictures, which appeared a couple of years ago, supposedly showed Ruffa and Donita acting wild during a summer rendezvous in a resort.

The two vehemently denied the pictures and insisted that the photos were manipulated. The issue never persisted, though there were talks that the incident almost caused Donita her prestigious MTV VJ job.

Interesting images of celebrities proliferated further with the popularity of cell phones with camera features. One of the first mobile pictures that caused a ruckus was that of starlet Michelle Estevez. The image was taken, reportedly by a group of young varsity players from a prominent collegiate basketball team, while Michelle was asleep during an outing at some resort.

Heartthrob Piolo Pascual, when caught in a similar issue, went all-out and denied everything on national television, including questions about his gender and sexual preference.

There were some instances of obvious computer manipulation, like the case of former actress and beauty queen Anjanette Abayari's calendar giveaways for the liquor brand, Tanduay. Anjanette publicly condemned the practice and even sued Tanduay for altering her image without her consent.

Other cases were the photos of Piolo and Sam Milby, and Piolo again this time with singer Erik Santos. These photos were later proven to be fake.

Predators who notice the resemblance use the name of the local celebrity to gain attention and make a living out of it. Videos bearing the names of celebrity look-alikes are commonly peddled on sidewalks. But, most of the time, viewers are able to recognize the sham right after viewing the video.

NO ONE TO BLAME. According to Professor Vera, authentic videos and photos of celebrities caught in a compromising position are usually done with their consent.

"It's different when they are being watched nang hindi nila alam. But most of these were private moments, so alam nila 'yan," muses Vera with a smirk.


"Whether [or not] they just wanted to document the moment, they must be aware that such actions caught in film or camera are always at risk to be exposed."

Celebrities, she said, should be more wary and responsible when it comes to their actions since they're always being watched.

When it comes to motives, Vera says it's usually the guys who suggest that such moments be recorded to flaunt their conquest.

"Men usually do that to show it off to their friends and since our society can be pretty judgmental when it comes to women, kawawa talaga ang mga babae once na lumabas yung mga ganitong kuha," sympathizes Vera.

"But again, they have no one to blame kundi ang mga sarili nila once the public finds out," she concluded.