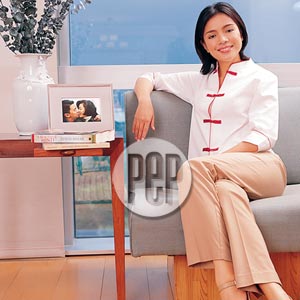 The abaca rug (not in photo) and sofa used to be in her brother Daffy's room. (YES! March 2002 issue)

Viewers see her on the telly 6 times a week, Mondays through Fridays on "Saksi," Saturdays on "Wish Ko Lang" and occasional Mondays on "I-Witness." But on even more hectic days, she's sent to the field.

"I do my makeup in the car, minsan sa kotse na rin ako nagpapalit," she says. "I call the news room from my cell phone. I ask them, ‘O, ano'ng lineup ngayon?' More or less alam mo na 'yun e. And I always listen to AM radio because d'un at least malalaman mo agad kung ano'ng nangyayari. So when you get to the studio medyo prepared ka na. Tapos, ayun, paspasan na. I just go through the script really fast."

"First and foremost, dapat may prinsipyo ka talaga. Talagang puhunan mo dito, trust." she says. As an anchor, she believes that whatever is reported is her responsibility. "It's the combination of the hard work of so many people and it's all on your shoulder and it's up to you to deliver the news. So kailangan ang mukhang nakikita nila mapagkakatiwalaan,"she adds.

"Then next, I think, dapat medyo cowboy ka'ng tao. You should be willing to get into anything. Kailangan kahit saan ka isabak, puwede ka. You can be this glamorous person but sometimes if they tell you, ‘Mag-live ka sa Zamboanga' or ‘Mag-live ka d'un sa sunog,' you know you have to remove those heels.Bahala na kahit maputik-putikan ka d'on, you do it. It should never get in the way of your getting the story."

And third, she says, is you have to be a team player. "Delivering the news has a lot to do with relating to different people. A lot of hard work really goes into it from the cameraman to the reporter to the writer to the producer!"

These days, what keeps her excitement running high is the documentary TV show "I-Witness."

"Maybe what has given great fulfillment was ‘I-Witness,'" she says. She points out that being an anchor and doing actual fieldwork are two different things. "I've always wanted to be a working journalist and it was ‘I-Witness' that did that for me. And it has allowed me to pursue stories that were close to my heart... that are very challenging to me."

She adds, "I think that has given my career a lot of depth. So I'm happy."

With 15 years of experience and a number of recognitions under her belt, Vicky tries to keep her feet on the ground. "To be honest, wala naman talaga akong malaking ambisyon sa buhay," she says. "For me, whatever comes my way, I'm just very happy as long as I know I consistently try to do my best. And if I get any award out of that, that's really good gravy."
Read Next
Read More Stories About
Vicky Morales, homes
Post a Comment
Featured
Latest Stories
Trending in Summit Media Network