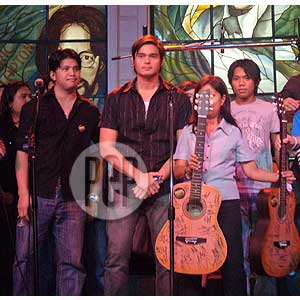 Dingdong Dantes shares the stage with band members along with representatives from the National Youth Commission and Dangerous Drugs Board to officially seal their united effort against substance abuse. They all recited a pledge to stay away from illegal drugs and encourage others to do the same.

In order to shatter a common misconception that rock music goes hand in hand with a hedonistic lifestyle, Sony BMG Music Entertainment recently collaborated with the Philippines' Dangerous Drugs Board (DDB) and National Youth Commission (NYC) to raise awareness against the perils of illegal drugs.

Some of the country's top bands like Cueshé, 6Cyclemind, Calla Lily, Craeons, and Moonstar 88 all performed at the Hard Rock Café in Makati last June 26 to show their support and, at the same time, prove that substance abuse has nothing to do with their creativity as artists.

Actor-director Dingdong Dantes also graced the occasion and showed his commitment to helping such a cause-worthy event. "I've always been an advocate and active member of worthwhile youth projects like this one," he proudly told Philippine Entertainment Portal (PEP) in an interview during the event.

Unknown to most people, the dashing actor has consistently participated in socio-civic projects concerning the youths.

"Ngayon lang ako umattend na may press talaga," he narrated. "Most NYC projects kasi are low profile so it's seldom na nababalita. But we've done a lot of activities which I'm very proud to be a part of." He also mentioned that he has been involved with this anti-drug campaign for around three years now.

This time battling against drugs, Dingdong enthusiastically shared why he strongly supports the effort. "I believe that drugs is one, if not, the most deterring factor why a lot of young people today feels hopeless and unable to realize their full potential," he declared.

The special event coincides with the observance of the International Day Against Drug Abuse and Illicit Trafficking.

Interestingly, the undertaking found an appropriate theme song via The Fray's single "How To Save A Life"—a song that deals with hope and second chances after falling into despair brought about by drug abuse.

The inspiring track is included in The Fray's How To Save A Life special Asian edition CD under Sony BMG and available at all leading record bars nationwide.